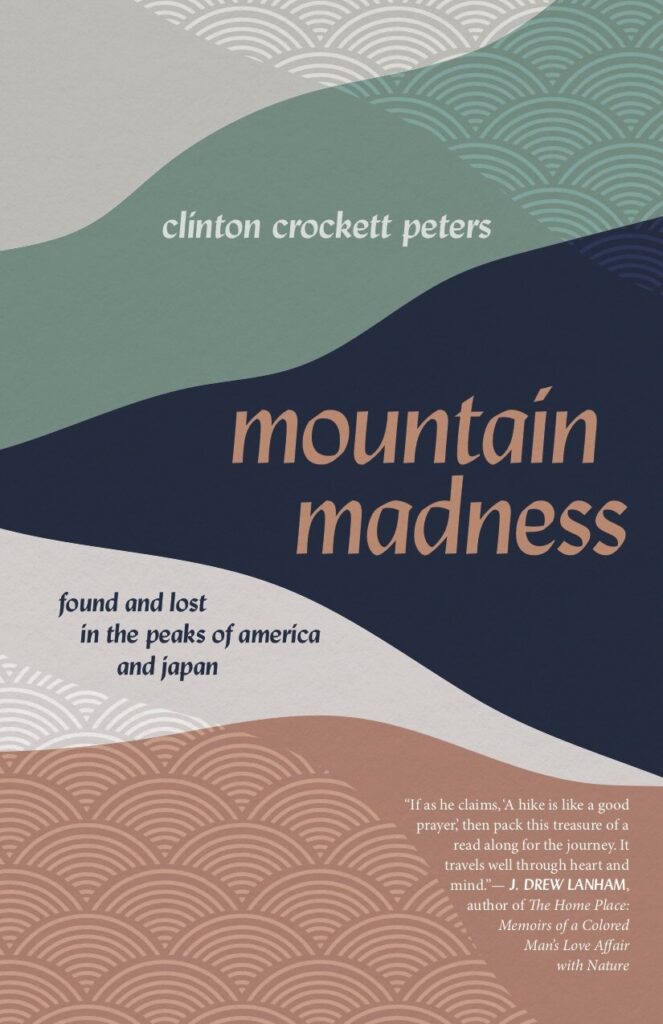 With Mountain Madness: Found and Lost in the Peaks of America and Japan, Clinton Crockett Peters chronicles his travels and personal transformation from a West Texas evangelical to mountain guide-addict to humbled humanist after a near-fatal injury in Japan’s Chichibu Mountains.

From 2007 to 2010, Peters lived in Kosuge Village (population nine hundred), nestled in central Japan’s peaks, where he was the only foreigner in the rugged town. Using these three years as a frame, this essay collection profiles who he was before Japan, why he became obsessed with mountains, and his fallout from mountain obsession, including an essay on Craig Arnold, the poet who disappeared on a Japanese volcano. Ultimately, the collection asks, how can landscape create and end identities?

Clinton Crockett Peters is an assistant professor of creative writing at Berry College, the largest college campus in the world. He holds an MFA in nonfiction from the University of Iowa where he was an Iowa Arts Fellow, and a Ph.D. in English and creative writing at the University of North Texas, where he was a Dissertation-Year Fellow. In addition to Mountain Madness, Peters is the author of Pandora’s Garden (2018, University of Georgia Press), a finalist for the ASLE Book Award and Forward Book Award. His writing appears in Best American Essays 2020, Orion, Southern Review, Utne Reader, Hotel Amerika, Oxford American, Fourth Genre, Catapult, Electric Literature, The Rumpus, and elsewhere. He has won awards from  Iowa Review, Shenandoah, North American Review, Crab Orchard Review, Columbia Journal, and the Society for Professional Journalists.

Amy Fish: Where are you right now?

Clinton Crockett Peters: Rome, Georgia. Berry College. Largest campus in the world. In terms of acreage, not students. 27,000 acres of land and about 3,000 students, majority undergrad.

AF: What do you teach there?

CCP: Creative writing, I’m the nonfiction guy. This semester I’m teaching “Writing about Place”, “Writing and Community”, and a class that I wanted to call “Sausage making for Creative Writers” but they wouldn’t let me. It’s a class about the business side, publication, that kind of thing. I had to change the name but I put a sausage grinder machine on the flyers and put them up around campus.

AF: That’s really funny. Are you a person who likes to travel? Or was it more that you moved specifically to Japan?

CCP: Absolutely, yeah, I love to travel but it’s so weird now because of COVID. My daughter was born, and I feel like I haven’t travelled in forever. Travelling gives me perspective. Kurt Caswell, a mentor of mine, has a quote about animals who migrate longer distances becoming less aggressive. Like the petty bullsh#t doesn’t matter as much.

I learned more about being an American by being in Japan than by being an outdoor guide for four years. Being a guide puts everything in relief, especially when you have to carry everything you need on your back. Same with travelling with people. The conversation moves as you move.

Nothing gets you out of a rut like travelling, I can’t wait to do more. It’s a privilege. Travelling can be dicey because you have to negotiate the moral landscape. Are people being exploited for tourism? If I’m flying a lot, I ask myself if the carbon I’m spending is worth it. 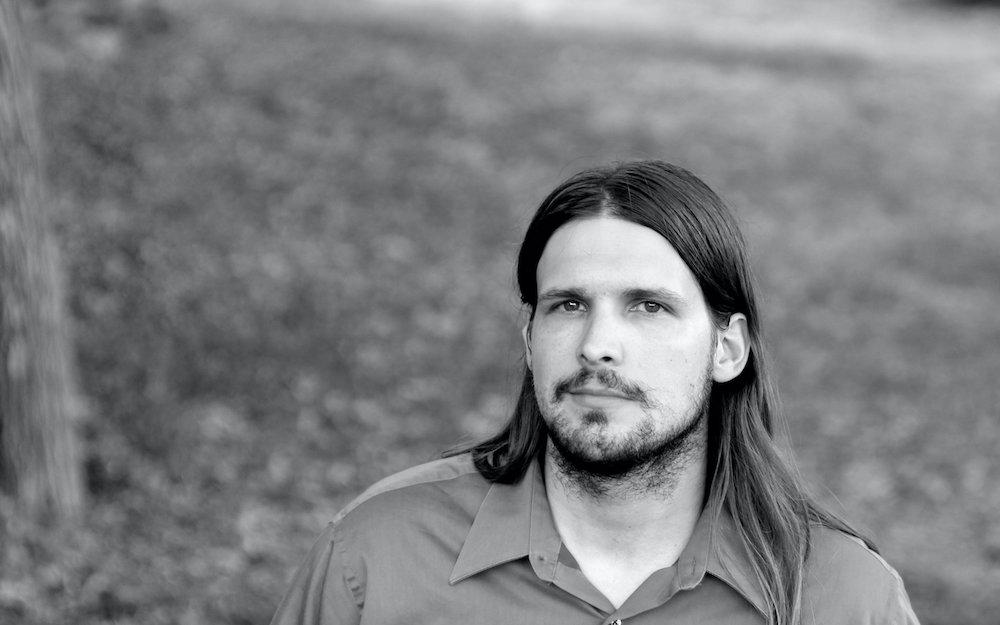 AF: How long did you live in Japan for?

AF: I think you did a great job of being cross-culturally sensitive and aware. In the book, you talk a lot about your height and your clothes, for example. What advice would you have for someone writing about a different culture?

CCP: Oh, yeah, I have tons of advice. Read more, more, more books from that culture. When I first went to Japan, I made the mistake of reading books about Japan written by white guys. Many were bitter. Halfway through my time in Japan, I started reading Japanese novels in translation. I wish my Japanese was better, and I know that sounds like an excuse but I tried and it’s really hard.

For people interested in Japan, I recommend books like Women in the Dunes. I also recommend reading literary criticisms by other cultures, of other cultures. For example, Orientalism by Edward Said was surprisingly readable and engaging. Read other critics and theorists. Also, be honest. There are travel writers who never mention race once and that’s just bizarre. Own your own whiteness. I’m still trying to figure it all out so that I can be better.

I struggled with this book because I didn’t want to write about Japan. I wasn’t sure if I could make it my story. I didn’t want a colonialist conquering vibe. Then I realized, I didn’t have to frame the book that way. It can be about both growing up in a hyper-conservative place in Texas and in Japan. I included the essay where I almost died because it was humbling. I want the reader to see I almost died. Better than a top down view that doesn’t acknowledge the ridiculousness.

I learned more about being an American by being in Japan than by being an outdoor guide for four years. — Clinton Crockett Peters

AF: You talk about your notes and journals in the book. How helpful were they when you sat down to write?

CCP: (Laughing). That’s the funny thing. I filled 23 Moleskine journals and I barely used any of that material. That was all practice. In Japan, I had very little confidence, I was just trying to find myself. I was reading Writing Down the Bones and Bird by Bird. When I looked back at my journals I was basically just complaining about my day. But it was helpful. Groundwork. You know, I’m staring at the box right now and there are maybe 50 moleskin journals. I don’t know why I said 23. I have to count them. They were helpful for dates, for reconstruction of timelines. When you’re writing sometimes you have to hack away at something that’s not ultimately your destination.

AF: Another thing I enjoyed a lot were the references to Japanese history and mythology. Can you tell me a bit about your research process for those parts?

CCP: Research is the fun part, like a mix and match collage. Parts of myself enjoy writing less. Learning about samurais is fun! I like to read books that I get from interlibrary loan. Or, if I can find them online for cheap, then I can highlight and make notes. I research and read and as soon as I see a connection I start writing in an artistic and creative way. If I hit on something, I take notes, open, pause, look for more themes and details and stuff that’s engaging. Like Maggie Nelson’s notes on the colour blue [Bluets].  I also encourage my students to interview people, to do “ride along journalism.” It worked for Joan Didion. I used this method more with my first book, Pandora’s Garden, and I highly recommend it.

AF: What are you working on now?

CCP: I’m writing two books simultaneously. One is about monsters, aliens, Godzilla. The other is ironic, unexpected environmentalists. Have you ever heard of the movie Roar? It’s an awe-inspiring spectacle. 70 cast and crew members got injured in some way. It is the most dangerous movie ever made. It’s a bad movie, but you have to watch it.

It was supposed to be one book but then I realized there were two distinct topics. One is about monsters, even John Wayne and the atom bomb can be monsters in a way. I normally work on about twelve projects at once–randomly and chaotically. I can’t just focus on one. I work on several projects at once and it takes me forever to complete. I don’t have an agent. I’m not too pent up about it. I just want to do the writing.

AF: My editor is interested in the cover, the title, how much input you had on both of those. 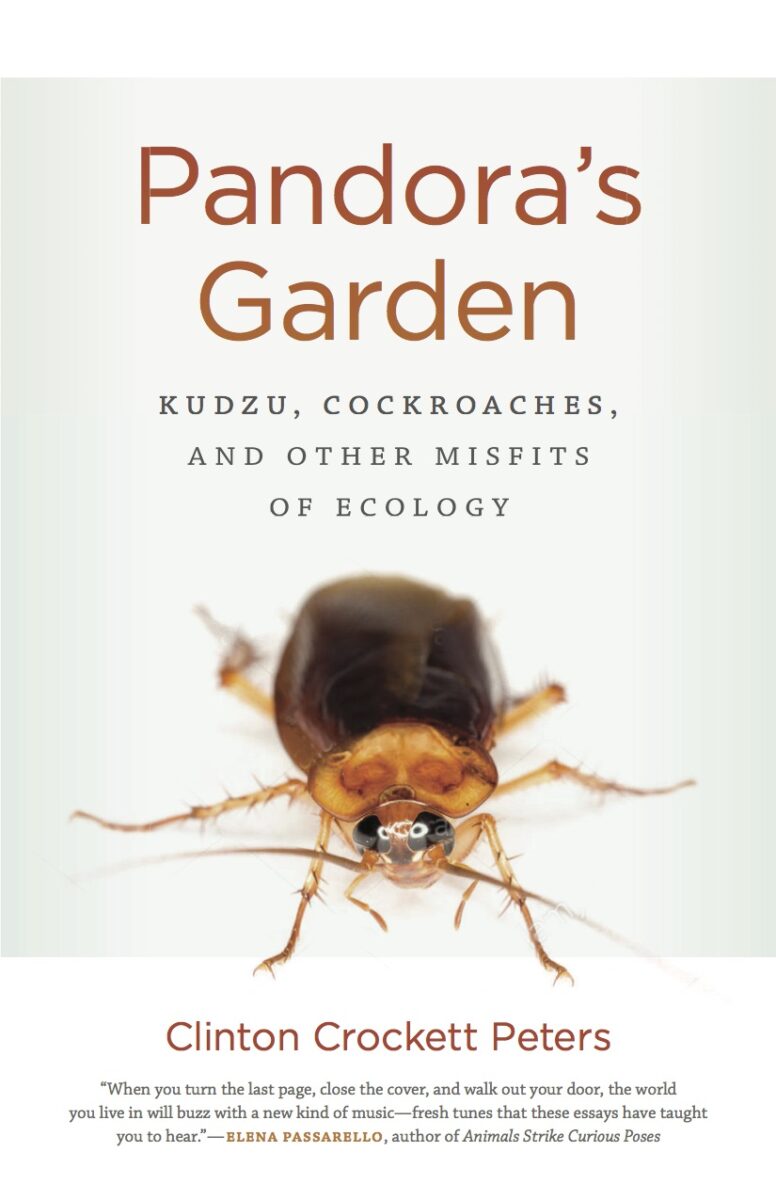 CCP: The first book, I picked the title and the cover. I couldn’t believe they let me have a cockroach on the cover. I thought it would get attention and Georgia [University of Georgia Press] said sure.

For the second, I was at a loss with the cover and the title. They came up with the cover. The title is okay. They might’ve really wanted to mention Japan, I didn’t want that. The concern was that people look for books about Japan and it should be in the title. We settled for the subtitle they came up with. I felt I kind of owed them one for letting me have the cockroach.

AF: How would you describe the structure of this book?

CCP: I would describe it as a peak, starting with me going up the mountain, Fuji. In the first essay, the narrator devolves and ends up getting a ride with a bunch of guys and is about to get fired. I fell in love with the landscape and the mountains, which was classically romantic although I didn’t know it at the time. Starting on Fuji was a deliberate choice, I didn’t want to be like Learning to Bow, which–and you can print this–I think is lacking in humility.

The central turning point is the essay where I almost died. I was so lucky, nature kicked my ass and told me “You’re going to get broken and this is what it’s like to be alive.”

AF: Was there anything that you wanted to include that didn’t make it into the book?

CCP: The last essay was “Made Fire” about Craig Arnold, it came together well but it almost didn’t make it. I was under deadline and it came together quickly–which for me is about two months. A couple of other essays were cut out–one about me going to Cambodia for a week while I was in Japan, about colonialism. I never got it together. I knew I didn’t have what it needed. I still see a seed of something there. It was a crazy experience.

AF: My final question. Hippocampus Magazine readers are always looking for recommendations. What are you reading now? I imagine you probably read more than one thing at the same time?

CCP: I love to read. Right now I’m reading The Big Necessity by Rose George, about poop. I’m reading Agatha Christie, belatedly. Destination Unknown is not my favourite, Crooked House was great and I also enjoyed And Then There Were None. I’m reading Shock Value by Jason Zinoman about new Hollywood horror films. Oh, and a graphic adaptation of Canterbury Tales. And Pauline Kael–do you know who she was? She was a film critic known for her acerbic, sharp wit. I’m reading her movie reviews too.

Mountain Madness: Found and Lost in the Peaks of America and Japan is out now with University of Georgia Press.