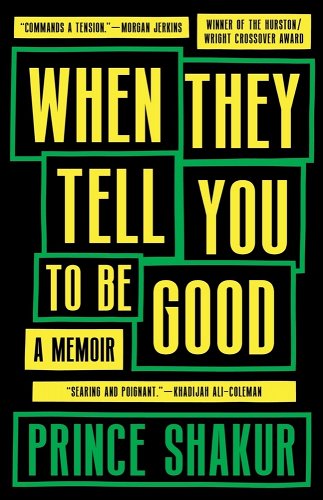 “To be Black is to weather pain,” Prince Shakur declares in his new book, When They Tell You to Be Good: A Memoir (Tin House, October 2022).

He continues: “Our families must break some part of us to make us less breakable when the world, hungry for Black flesh, tries to break us too.”

In this description, Shakur not only encapsulates the pain he has felt from within his own family, but also the continued shattering of all Black Americans’ safety every time they hear about another needless murder of one of their own.

Shakur’s memoir is a beautifully written, clear-eyed meditation on his multiple identities and how they fit into the larger American society, one built on the backs of slaves and becoming seemingly more divided right in front of his eyes.

Shakur’s family originated in Jamaica, which has its own bloody, difficult history. Two of Shakur’s uncles were murdered there and then vilified by a politician who called them “no angels” because of their “extensive criminal history.” Shakur was raised by his mother in Ohio. His father was a mystery, only known to him through the family stories of how he’d left after Shakur was born, later murdered after several men shoved him out of a moving car.

It’s a lot of intergenerational trauma for a young boy to navigate, especially when it doesn’t seem to connect with his own memories of many of his family members.

“Although the media purported large, Black men to be scary, I mostly thought of the many uncles I’d seen at barbecues growing up as they laughed, drank beer, and hugged their daughters tightly,” he writes.

His family’s history aside, Shakur had another personal struggle growing up: he was gay, inside a family that thought homosexuality was a grave sin. His mom learned he was gay after snooping through his journal, and to this day, she has not accepted it.

It wasn’t until Shakur left home that he was able to finally embrace his queer identity. He traveled and lived around the world, in Paris, Seattle, the Philippines, Montana, and Morocco. In many of these spaces, Shakur’s Blackness continued throwing up barriers to him fitting in. The queer scene: mostly white, and not understanding of his culture or background. The lefty social justice protest scene: again, mostly white, with privilege allowing the protesters to participate in ways that Shakur wouldn’t imagine doing because of the consequences.

At the same time, as Shakur became more self-confident, he finally felt able to explore romantic relationships — and these are some of the most joyous and beautiful parts of his book.

Ultimately, Shakur’s story of Black pain also becomes one of Black joy and self-worth as he finally realizes he has the power to decide and write his own identity. Luckily, writing is one of the things that ends up saving Shakur — giving all of us an intimate view of a young Black man entering a world of pain but coming out the other side with wisdom and hope.