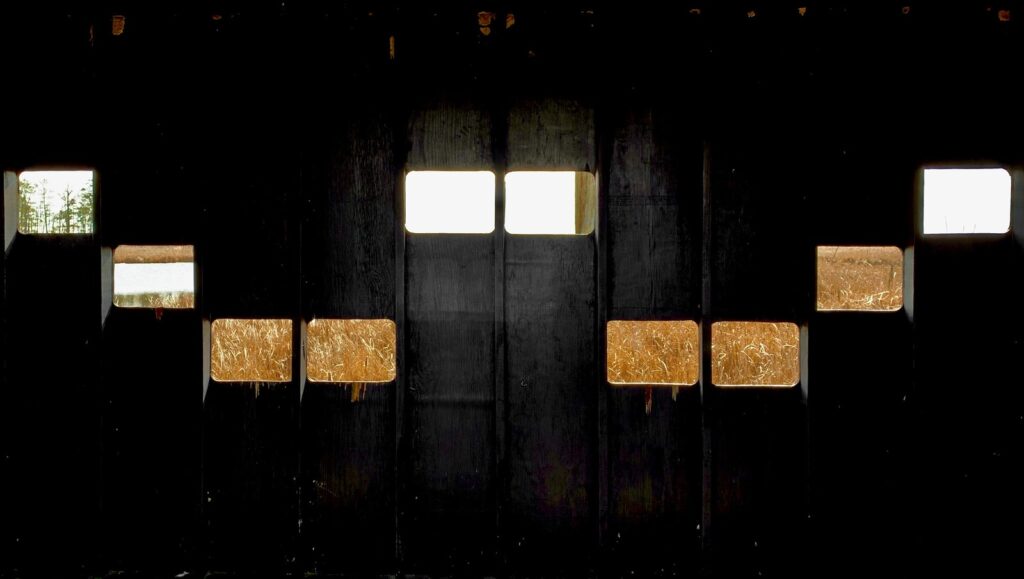 I can still see Dad in his hunting jacket — bronze-colored, with snaps in the front — playing the beam over the forest floor. He aimed the flashlight into the trees, then into the slight, leafy depression in front of him. I spotted a caterpillar so furry it looked like it’d purr.

“Left at the fork.” He wasn’t talking to me. He was trying to remember which way to go.

I couldn’t see the fork — I couldn’t really even see the trail. Critter tracks crisscrossed the ground, paths blurring one into the next, bleeding at the edges until there was no path at all. If I’d been by myself, I would have sat at the base of a tree and waited until the sun rose before I took another step. But I wasn’t by myself. I was with Dad.

He made a “halt” motion with his hand.

My rifle banged against my leg because the strap was too long.

A buck froze in the beam — a bold creature, muscular and hardy, its pelt so shiny it looked like woven silk. I counted at least eight points on the antlers. Its eyes, polished onyx, fixed upon us. It was the most confident, unworried thing I’d ever seen. Slowly it turned away, stepping deeper among the scrub oaks and acorns until it melded into the darkness as if it had never been there at all.

“Wrong season.” Dad gulped some tea from his thermos.

“Not at this range.”

I swallowed the last bite of my Twinkie and wiped my fingers on my jeans.

The duck blind was at least two chilly, leafy miles in from the road, tucked away on the edge of a long, unpopular finger of the lake. We could hear the flock long before we reached the cove, the hens calling to their families, the drakes repelling rivals. Ducks are noisy, sociable birds — they quack and flap and splash and chuckle throughout the night.

“What a ruckus!” Dad’s voice was hushed and excited. I watched as he swept the flashlight over the blind. It looked abandoned. A few dried branches lay on the roof — it was hard to tell if they’d really fallen or had been artfully arranged to look as if they’d fallen. He tapped the slats like a woodpecker, waited. No badgers. I made him clear out the spider webs before I stepped quietly inside, sat on the bench. Someone had put a big rusty bucket full of spent shells below the shooting slot. I nudged it with my toe, listened to the hollow, metallic clink.

“Load it up,” Dad said just above whisper.

I laid the Winchester across my knees. The blackness was already thinning to gray near the horizon, but I couldn’t see the lake yet — just a hazy silhouette of hills on the opposite shore.

Dad handed me three rounds and aimed the flashlight on my gun. It had pretty, polished wood grain on the stock — walnut, I think — and blue-gray steel on the barrel. I liked the gun, was happy he’d given it to me. He watched as I pushed the bullets into the chamber, poked them down into the shaft with my fingers.

“You have to hear the click.” He prodded the last bullet until the catch popped up. “Remember how they sit?” He pointed to the chamber.

He told me he’d pull first, then I could take a shot, set up the sight, take another shot. “Just like you do at the range,” he said. “Get a clean bead on it and then shoot right into the breast.”

I’d never bagged a duck. But at the rifle range at camp, I usually hit the circles near the bull’s eye. Sometimes I pierced the center. Dad was proud when he looked at the target sheets I’d put aside to show him. He never looked at my homework the same way. For all I knew, he never looked at my homework at all, but I still left some of my tests and papers with the mail we saved up for him. The targets were different — they earned his interest. One of those times when he came home after I was asleep and left before I woke, I found a fifty-dollar bill topping a bull’s eye on the kitchen counter next to a packet of instant oatmeal.

Outside the blind, I heard the sharp cry of a nighthawk, the snap of a branch where a creature stepped, the dismal drone of some insect who should have died with summer.

“I wish I’d brought a Remington.” My voice was just loud enough for him to hear.

At the range, I shot a Nylon 66. It was good for bottles, too. “The Winchester’s too heavy.”

Dad loaded his rifle and clicked the bolt into place. “It’s the boys model. It’s not heavy.”

“I’m not a boy.” I jiggled the bucket with my toe.

“Sit still,” he whispered. “Practice using the sight. Get a feel for it.”

I told him it was still too dark and I was too tired and I’d rather be in bed at Big Bear Resort, watching Saturday morning cartoons.

Dad exhaled through his teeth. The ducks chuckled. Then he stood, aimed his rifle, held stock still. Maybe he heard something I hadn’t heard — another deer, maybe. His intuition for things was better than mine. He knew when to take Mother to the hospital, when to let her sleep it off. I was never certain when to call the ambulance. He locked on something in the woods, held it in his sight.

“If you kill it, you’ll scare the ducks.”

“There’s nothing there,” he said.

“You’re gone all the time. You leave me with her and I hate it.”

A crow cawed overhead. Sudden raspy cries in the oaks.

“Never say that about your mother.”

“Keep your voice down,” he whispered.

The sun skirted the hills and a pristine, glass-covered cove came into view. At least thirty, maybe forty, ducks paddling and dunking their sleek, gaudy heads beneath the surface. The cadence of their calls accelerated as the sky brightened.

Dad and I stood side by side in the blind, rifles butted into our shoulders, squinting. We were closest in these moments, planting tomatoes, baiting a hook, swinging the Number 2 wood. I put a mallard in my sight, its green emerald head shining against the silvery surface of the lake. Like a jewelry setting, a cameo.

“Let them lift and get over the shore. When I fire, they’ll flair downwind. I’ll cover the left. Move over so you get a clear shot off the right.”

I stepped toward the corner and the bucket clattered to the floor, rattling, the shells rolling and scattering, a loud, painful, grating sound. It echoed in the blind and carried to the lake. The ducks took off, confused and hysterical, flapping with all their might, winging away.

“Criminy!” Dad got off a few shots. “Christ Almighty! Come on, Dawn — shoot!”

I tracked a lonely duck into the sky over the woods.

It was a sharp blow to the heart. It must have been the bullet — maybe he’d used too powerful a round. The recoil jolted me against the bench, my gun swinging as I sought balance, gulped air back into my empty lungs. Dad grabbed the barrel I pointed at him, my finger wrapped around the trigger. He froze, his eyes hard and defiant. Maybe in that slice of time cut so thin that thought can barely hold it—maybe in that interstice, in that freeze frame—maybe he wondered if I would do it.

He shoved the rifle away. “What the hell has gotten into you?”

Dad jerked the rifle out of my hands. He stared at me, as if he were trying to place me. I wasn’t the son who had died.

He stomped out of the blind, down to the shore, then into the trees while the distraught cries of the flock faded overhead. I kicked the shells against the wall, mad at him, mad at myself, mad at the ducks, mad at destiny down every path I could imagine. There was nowhere I could go without his help. I’d seen Go Ask Alice, twice. I knew what happened to runaways. I didn’t want to end up in worse trouble. I wanted to move in with a friend whose parents sat down to eat with the kids every night, whose mom made mashed potatoes.

A few shots exploded in the distance. Maybe he was after squirrels or rabbits. I stuck my head out the shooting slot. The water had settled. The surface was smooth, fragile, and opaque — a skin of foil. At the mouth of the cove, a fishing boat had anchored just this side of the channel. A wrinkle of wave.

I unwrapped my last Twinkie, licked the cream from the cellophane, and wandered down to the gravelly shore. I lowered myself onto a piece of driftwood and settled in for the wait. Dad always came back eventually. Until he never came back.

The bright light on the lake pained my eyes. A duck looped in the reflection, trying to find its flock, calling frantically with every downbeat of wing. 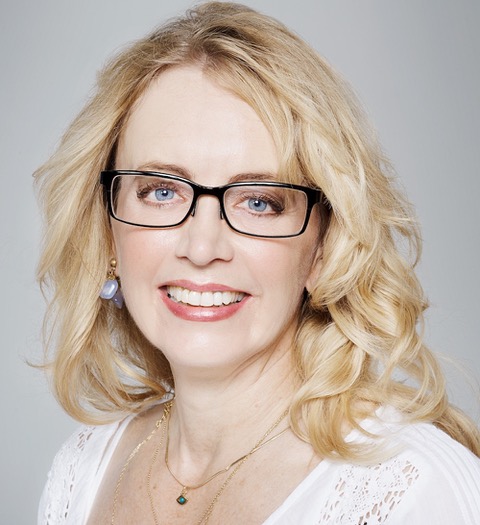 Senior Fulbright Fellow Dawn-Michelle Baude has published seven volumes of poetry, four communications books, and dozens of art reviews and monographs on both sides of the Atlantic. Her pieces have appeared in the digital and/or print formats of Vogue, Newsweek International, Huffington Post, ArtCritical, Art+Auction, and the Los Angeles Times.