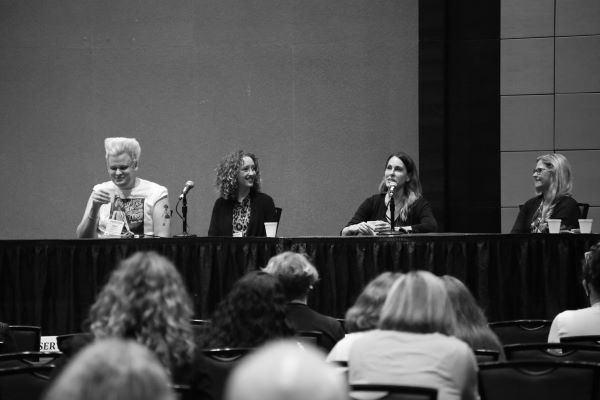 Pretending I was at a cafe, I clutched an excellent Vietnamese iced coffee from New Holland Coffee Co. as I listened to Jeannine Ouellette (The Part that Burns), Carol Smith (Crossing the River: Seven Stories that Saved My Life, A Memoir), Greg Mania (Born to Be Public), Lilly Dancyger (Negative Space) and Claire O’Brien read at HippoCamp’s Night of Nonfiction. 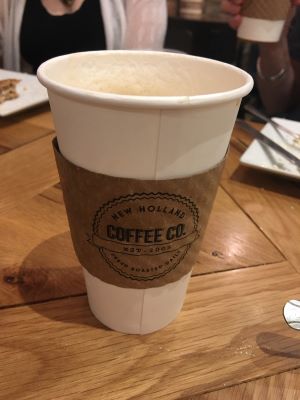 Photo by — and coffee consumed by — Kristen Paulson-Nguyen

“My book came out in May, and this is the first in-person reading I’ve done,” said Smith. Heads around the room nodded in fellowship. After more than a year in isolation, I wasn’t the only one who relished sitting with others, savoring the debut authors’ words. To celebrate, I opened my notebook to a fresh page and took out a colored pen.

“…tuned the thin string of silence between us to a sharper pitch,” read Ouellette. I sighed with pleasure. Split/Lip Press published her memoir in January 2021.

Claire O’Brien, winner of the 2020 Hippocampus Magazine grand prize for Creative Nonfiction, read her prize-winning essay “Dead Weight,” part of her larger project, “Tomorrow, We Might Wake Up Dead,” about her career in human identification.

After they read, the authors generously shared details of their journeys to publication during a panel discussion. Smith spoke about how she knew her memoir’s title before its content. She’d searched for language to describe her unspeakable experience of losing her son. She didn’t have it. Then she read a New York Times story that described giving birth as “crossing the river” (a Cambodian term). “That’s it!” she said. “Losing a child is like crossing a river; a boundary between worlds.”

Lilly Dancyger (Negative Space, Santa Fe Writer’s Project, May 2021) spoke about the challenge of writing about the different sides of her father. “I didn’t try to reconcile my dad into a coherent picture,” she said. Finding a category for her book, she said, was difficult. “Let’s see if I can make this normal,” she joked about her hybrid art book and memoir, about which she was asked: “What is it?” “At least,” she said, “until the Santa Fe Writers Project understood it.” 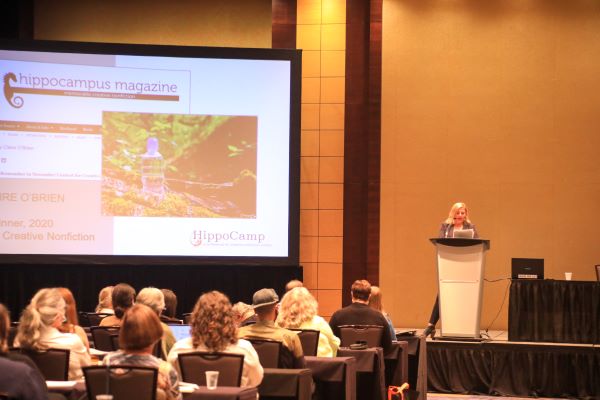 Ouellette spoke about how she sent different versions of her MSS to agents. “I didn’t know how to categorize it,” she said, “because it was fragmented.” She tried to rewrite it with a narrative arc, but it didn’t work. She decided to work with an indie press because it was right for her.

How do you know when you’re done? asked an attendee.

“You have to let it go and trust the work. Trust it will take care of you,” said Ouellette. Dancyger shared her yardstick of knowing when a book was done: “I wouldn’t feel completely humiliated if people read this book.”

Ouellette continued, “Only you know if you’ve built the best book. That discernment is the job of being the writer.”

Kristen Paulson-Nguyen is Hippocampus Magazine’s Writing Life editor. She was a debut Flash speaker at HippoCamp 2021.