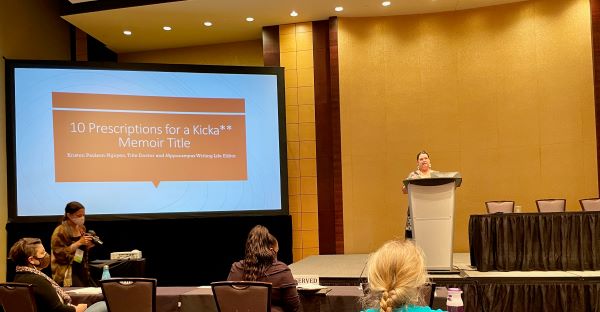 Kristen Paulson-Nguyen at her flash session at HippoCamp 2021. Photo provided by Eileen Drennen.

Kristen Paulson-Nguyen was not wearing a white lab coat with “Title Doctor” stitched across the front in blue cursive, but I hope she has a few on order. Her word medicine — and advice — was that good.

As a Title Doctor, Kristen is licensed to issue prescriptions for writers in search of that winning title; you know, that winning combination of consonants and vowels that will make their book stand out from the crowd. Without the right title, you can talk at length about “The Book” or your “Work in Progress,” but you may find it hard to make your potential readers care. Here are Kristen’s “10 Prescriptions for a Kicka** Memoir Title”:

1. Start with your manuscript, query and synopsis. Look for the big picture themes that are your title’s building blocks, — you know, as Kristen says, “grief, love, loss, addiction— all the fun stuff we memoirists like to write about.” Pluck images and actions out of your research. See what might work. The title Kristen created for a client by combing through her pages: “Only the Stars Divide Us.”

2. Choose the tone that fits. Is your work funny, mournful, serious, lyrical? Your title will need to match. For Virginia DeLuca’s memoir about her life after her husband left her for a younger woman, Kristen prescribed, “If You Must Go, I Wish You Triplets.” I will buy that book when it comes out for the title alone!

3. Mine conversations and dialogue. Writer E. Dolores Johnson considered using the title “HalfTones” for her memoir about the mysteries at the heart of her interracial family. Combing through the book’s dialogue revealed a quote from her mother (about what Dolores should tell any family who asked about her), that became the book’s more engaging title: “Say I’m Dead.”

4. Try a verb. Action and plot hints can juice up your title. Consider Gina Frangello’s “Blow Your House Down,” Jeannine Ouellete’s “The Part That Burns” and Garrard Conley’s “Boy Erased.”

5. Rework an old saying. Consider your themes and brainstorm maxims that might lend themselves to a funny or moving twist. Kristen’s own book, about marriage and her husband’s penchant for hanging on to things, became, “To Have and to Hoard.”

6. Titles with multiple levels of meaning work hardest. For her amazing memoir about her artist father and the work and stories he left behind — he died when she was 12 —  Lilly Dancyger had been using the title “Hunter / Hunted,”  the name of one of his series. That was when she thought she was writing a monograph about her father’s art. In time, she discovered the story of her father’s absence, and how it affected her, was an essential part of her story. Brainstorming a list of art-related terms helped her find “Negative Space,” the phrase that summed her book up so brilliantly.

7. Play. Get as wild as you want. Make up your own word, as Patricia Lockwood did for her hilarious memoir, “Priestdaddy.” Try a one-word title, like Ashleigh Renard’s “Swing” or Sonali Deraniyagala’s “Wave.” Combine two words typically not seen together, as Katherine E. Standefer did for her “Lightning Flowers.”

8. Be specific, but also leave room for mystery. A memoirist came to the Title Doctor for help with a book she was calling “A Mother’s Truth.” Questions revealed a fuller picture, leading Kristen to create the evocative replacement title, “On The Other Side of Silence: A Muslim Mother’s Love.”

9. Run your potential titles by as many people as possible. Seriously, Kristen says — don’t be shy! The more folks you ask, the better your results. If you ask people who don’t know you to guess what the book is about from your title, you’ll get a focus group without paying anyone a dime.

10. Test your titles on friends and strangers. If you want to come up with a winning title, you have to run it by potential readers and take note of their reactions. Do they immediately say, “Oh hell yes, I would read that!” Or do they squinch up their faces and look off to the side?  If all else fails, call the Title Doctor for stronger medicine. I believe she makes (Zoom) house calls!

Eileen Drennen is a writer and editor living in Lafayette, Indiana who worked in daily newspapers back when most people read one every morning. Her work has appeared in The Rumpus, Literary Mama and O, The Oprah Magazine.