Four moons in the night sky. This is planet Earth. The halfmoon petals glide away from the pistil, phosphorescent, a cancer cell dividing. During the day, people and cows double. Dogs and ducks, cars and street signs. The double is a phantom not all the way separate from the body. This is planet Earth. Light fuzzes a halo around itself. Reflected from doorknobs. Emitted from streetlights. My spine burns. I splinter, my limbs roped to horses running away from me in a blooming circle. They run in place so I never break. I feel the constant tension of my body about to split. My brain resists any effort to think or to allow myself to move. I scrub half a kitchen cabinet in the house my new husband just rented. I lie face down on the floor until the dizziness and nausea subside. I clean the other half of the cabinet. Words blur on the page. I can’t read. Time quadruples. I think ten minutes has passed. I am forty minutes late to my appointment. “When will I get better?” I ask my neurologist. “You know my brother had a head injury like yours,” he answers. “He shot himself.” 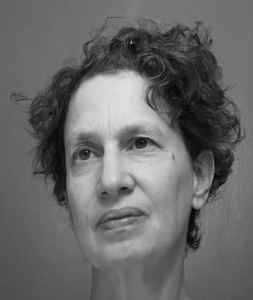 Rebecca Snow’s debut novel, Glassmusic, was released from Conundrum Press in 2014 and shortlisted for the 2015 International Rubery Book Award. Her creative nonfiction, poems, and book reviews have appeared in Plenitude, Rattle, The Norwegian American, and elsewhere. She was awarded the Robert and Daryl Davis Fellowship in Poetry for the 2015 Longleaf Writers Conference. Originally from Seattle, she has taught college English for thirteen years and recently relocated to her home city. Her current complete manuscript is a speculative novel for young adults, set in the Cascade Mountains.

4 comments for “Before the Horses Stopped Running by Rebecca Snow”