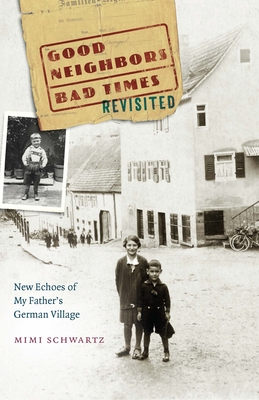 Mimi Schwartz’s Good Neighbors, Bad Times Revisited (University of Nebraska Press, 2021) is, as she writes in her author’s note, “a book of the small stories, the ones that history has no time for as it paints the broad brushstrokes of the past.” While this author’s note accompanies the first edition, a careful investigation into and thoughtful reminiscence of her father’s German village of Rexingen where Jews and Christians were friendly and “everyone got along,” this second edition expands that history with even more “small stories.” Thirteen years after the first edition of Good Neighbors, Bad Times, Schwartz’s revisitation contrasts the memories of her father’s friends, family, and neighbors in Rexingen with the stories of Max Sayer, whose unpublished memoir details his experiences as a Catholic child growing up in that same small village during the 1930s and 40s.

Schwartz positions moments from Sayer’s memoir not to explicitly juxtapose his memories with those of the Jews in Rexingen, but to expand the scope of the stories, putting them in conversation. Sayer’s memories of the public auctions of Jewish homes and properties is nestled between the story of Willy, one of only two Rexingen Jews who survived the concentration camps, and what Schwartz found at the archives in Horb: a transition between a vivid retelling and a more distanced investigation.

As Schwartz moves the reader through her research process, we meet—and it does feel as though she is introducing us—to characters from Germany’s past and present: From Hannah, Gretl, and Lotte, who fled Rexingen in the 1930s to Rolf and Herr Stoll, researchers and archivists in Germany, Schwartz brings each person and their memories to life. Minor details like the pattern of a set of plates become links that create “the small pleasure of continuity that survived from one life to another.” Slowly, she pieces together the story of her father’s special village, where far fewer people voted for Hitler than the national average and the residents display grace in the dark times through small actions. Schwartz hopes, and we feel that hope as readers, that learning what the residents did or did not do in the tumultuous times of Hitler can help us learn about our own lives today, a today with rising anti-Semitism once more.

After talking with so many old neighbors, Schwartz makes a list of the “small acts of defiance” that have defined Rexingen as different from the other German villages of the Hitler years: Businesses continuing to serve Jews after it was forbidden to do so, Catholic families giving food and clothing to their Jewish neighbors, people in positions of power speaking out against the atrocities, and even a policeman saving two Torahs from destruction.

Though she collects volumes of stories that showcase the kindness and compassion of her father’s village, there are some people—like Angie in San Francisco, the child of possible Nazis who keeps any potential negative memories of Germany at a distance—who challenge Schwartz’s perceptions.

After a while I will tell them about Angie and admit that I feel vulnerable in their country until someone proves to be nice. And Germans who are nice will tell me about a grandfather who is still a Nazi, and a father who was a train engineer near Auschwitz…

Katherine is another challenge, though not at first. The granddaughter of an anti-Nazi, she purchased most of her beautiful antique furniture from Jewish families desperate for money to flee Germany. Schwartz’s response to this discovery is immediate and visceral.

I lift both arms off the table as if electrocuted. Suddenly this lovely, tasteful room feels like a museum of the dead, even when I learn that those who owned these antiques aren’t dead.

Despite the shock and anger that Schwartz expresses in these moments, she continues to explore the richness of Rexingen’s collective memories and the stories that help to explain how good people dealt with Germany’s past. Her namesake, the other Miriam, gives one possible answer: “If you accept your past, your powerlessness at that time, and see what you are doing now—telling it to young people like me—you would feel better.”

Good Neighbors, Bad Times Revisited is not the Holocaust book of my childhood: Schwartz’s stories do not focus on the horrific details of the Third Reich, concentration camps, and genocide. Instead, she paints using the most delicate brushstrokes to capture the small moments of kindness, fear, and complexity: the “cracks so small they are almost invisible; yet when too many add their weight, we all fall through.”