I’m an unabashed fan of writing groups. By joining a community of writers, we can ward off isolation, forge friendships, and inspire collaborations. Members swap information about craft and publishing; and watch one another realize their big dreams.

In 2015, I’d reached a turning point in my writing life and realized a group might help me start my first book. I’d already benefited from studying craft in academic and workshop settings. I’d worked as a journalist, written and produced two plays, and taught students to write and give speeches. But I was unsure how I’d pull off my next goal—writing a memoir about getting married after 50 for the first time.

That’s when I found the Los Angeles Meetup group, Venice Area Writers Block. Like most L.A. drives, it was a schlep—45 minutes each way if traffic was kind. It rarely was, but that trek each Saturday was a gift to myself. It laid the foundation for my book. Plus, I got to watch other writers develop their fabulous projects. The group welcomed beginners and established writers. We socialized, wrote for two hours, and read our work aloud. We offered no critiques—just applause. Each week, members got words on pages.

When my family moved to Maryland in 2017, I missed my writing community and visited several groups in my new hometown. Each had lovely qualities but weren’t the right fit, so I started Maryland Writers Bloc and got to know 50 local writers.

The pandemic inspired me to expand my reliance on others. Early in 2020, I thought of Anne Lamott’s treatise on craft, Bird by Bird. She covers how writing groups differ from writing programs, which she writes “can be cutthroat and competitive.” She praises the power of writing groups for providing “feedback, encouragement, benevolent pressure, and the company of other writers.” I followed her nudge and joined three different groups, which was possible since they take place virtually.

Women Who Submit is one of those groups. It seeks to empower women and nonbinary writers to submit work to literary magazines in order to expand their representation in those publications. During the pandemic when their meetings took to Zoom, the group began sponsoring Saturday gatherings where members report successes and challenges from the previous week and set intentions for the coming week. We celebrate publications, grad school admissions, and teaching successes. Members even applaud pieces submitted that were turned down. Each “rejection” is a win—it’s another time someone sent out their work and got closer to finding it a home.

Since some of my work is more mainstream, I also wanted the camaraderie of journalists. Luckily, a friend connected me with Upod (Under Promise Over Deliver), a group started by writer and editorial consultant David Hochman. He describes Upod as “a place where freelancers gather to support, inspire, amuse, inform, advise, celebrate, and, yep, hire each other.” Mr. Hochman also offers weekend workshops that introduce writers to top editors, publishers, and agents from publications including The New York Times, The Washington Post, Vogue, and The New Yorker.

I was emboldened and inspired by the doggedness and talent Upod members bring to their work. The result? I’ve had pieces in three dream publications: The Washington Post, The LA Times, and AARP’s The Girlfriend. Members wholeheartedly help one another. If I posted, Where can I place my story about skydiving with my dog?—guaranteed, people would clap back with a list of possible venues.

Finally, I attended the Erma Bombeck Writers Workshop at the end of 2020, an extraordinary gathering of humor writers. Getting to know others who use comedy to temper the challenges of recent years has been a balm to my own pandemic malaise. When the workshop ended, we could join a private Facebook group where we cheer on one another’s writing successes (and heartbreaks).

One of the keynote speakers at the Erma fest was the brilliant writer Annabelle Gurwitch. In her new book—You’re Leaving When?—Ms. Gurwitch tells how she started a virtual writing group when her city first went into a pandemic lockdown. “In a sugar-fueled manic panic, I fired off an impromptu email to approximately 180 writers to join me for three hours of ‘writing alone together.'” They met on Zoom to hammer out pieces from their own bunkers. It worked well. She finished her wholly engaging book.

My scribe tribes helped me complete a more refined draft of my memoir and a book proposal, which is thrilling, even with my elderly mom regularly (and lovingly) asking “how’s the book coming?” I’m currently navigating the steps of finding an agent and publisher, helped by fellow writers who are either going through it with me or have already published books.

Among the takeaways for me from these groups is the need to generously swap tips with one another. We share email addresses of hard-to-find editors and agents, ideas for where to pitch pieces, and suggestions on how to rework stories so they get published.

For those who want to find their own circle of writers (or start one), there are lots of options and most are free:

Writing is often a solitary endeavor, but we don’t need to go it alone. For many of us, the deeper we go with our craft, the more we rely on a community to help bring our work into the world. That’s why I love reading the acknowledgments sections in books. They’re proof that beautiful writing doesn’t spring only from the author of record, but also from all the people who cheer them on. 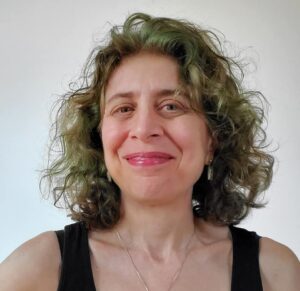 Laura’s writing has appeared in publications including The Washington Post, The LA Times, AARP’s The Girlfriend, PS I Love You, and LA Weekly. She is completing her memoir, How I Got Married After 50 for the First Time. She produced and starred in a one-woman show about finding the perfect place to live. Laura earned an MA in Writing/Theater/Communication from George Mason University. Find her at laurasturza.com.

4 comments for “WRITING LIFE: How Writing in Community Rocked My Writing by Laura Sturza”