Summer is an endurance test. Here in the Deep South as July melts into August my once perky garden starts shriveling, on strike against the heat, and daily thunderstorms become the meteorological expression of my mood—feisty, dark clouds grumbling with an atmospheric “Enough!” My writing projects tend to go limp in the humidity as my brain thinks only of gelato and the refreshing, rehydrating zip of my go-to Vinho Verde. But there is one saving grace of summer’s most sweltering days, and one thing I never get enough of in the long slog that is July—it’s Tour time, and I’m on the edge of my (air-conditioned) seat.

Yes, what I love most about summer is endurance itself, all 3,349 kilometers of the greatest road show on Earth, and arguably the ultimate of ultimate sports—the Tour de France. Most days I’m tuned in for chunks of the hours-long live broadcast, and every evening for the highlight reel and recap, binging on bike racing like it was Succession or Better Call Saul.

I love the Tour’s 109-year history, its quirky traditions (a stuffed lion presented to the day’s winner, as if he were a preschooler, not a professional athlete), and its sheer staying power in a world always seeking new and flashy diversions. I love its unpredictability, the way each of the 21 stages of the 23-day suffer fest (with two rest days) is a new chapter, with literal twists and turns, breakaways and chases, heroes and occasionally villains—an ever-changing narrative rolling along at breakneck speed. I love when I finally start to recognize who’s who among the cyclists’ chiseled faces, their uber-lean frames and meaty mega-quads. And when I begin, ever so slightly, to understand the team strategies, though I’ll never understand the crazy fans who wait for days to get a split-second glance at the riders and then like idiots almost knock them down. I love seeing the blur of ancient chateaus, the old mossy roofs and lush, sunflower-strewn countryside as the peloton whizzes by.

I love it all because, despite the unfortunate fact that there has never been a woman in the Tour de France, or that, as an avid cyclist I’ve never ridden a bike as fast as these guys can coast, I’m right there with them. That’s me somewhere amidst the clump of spinning spokes and grinding chains—my head down, sucking wind. And I think it’s most writers. We are endurance athletes, showing up day after day to put the miles in, to go wherever the terrain takes us, to embellish the simple formula of human + machine (cyclist/bike; writer/laptop) with enough imagination and grit to get the job done. Or that’s the goal, anyway. And I also love that the Tour offers a few tips for writing, so buckle on your helmet and let’s take these for a spin.

Not as in Anne Lamott’s Shitty First Draft (but big yes to that!), but draft as in middle of the peloton draft. That’s the secret to surviving a 21-day, 130+ miles a day, blistering race: experienced cyclists know how to catch (and cautiously watch) the wheel of riders in front of them, then be carried along in the slipstream. Riding (or writing) solo or at the lead of group or breakaway takes tons more energy, and it’s all a game of knowing when to conserve energy and when to let it rip. While a writing group may not be for everyone, finding a prose peloton of some sort where you can draft a bit and be pulled along by collective energy (a mentor, a book group, listening to a podcast, going to HippoCamp, or a writing retreat/workshop) can be a game-changer.

Watching the Tour is to watch muscular legs hammer relentlessly, keeping a steady  (often inhuman) cadence, whether they’re climbing the iconic Alpe D’Huez or cruising along flat terrain. To maintain that consistent pace, cyclists are shifting gears constantly. Efficient writers do the same. Some days require a faster gear to do some sprinting—getting a rough draft done quick and dirty, for example. Others you might shift into a mid-range gear and simply aim for a comfortable rhythm—nothing Lance Armstrong, another 800 to 1000 words (half of which you’ll eventually delete) will do just fine for now. The different gears are there to use, so shift around until you find what works for you. Similarly, good writing also entails modulating pace—knowing when to create tension or suspense, when to tuck readers into a steep and swift descent, or when to let up and gently glide by another pasture or two. Metaphors not withstanding, the brutal reality is that some days are all uphill (sorry!), and whether riding or writing, you’ll wish you had one more gear on that chain ring, or better yet, an E-bike.

There are certainly faster and less tortuous routes to get from Copenhagen (this year’s race start) to Paris, where the Tour de France always ends with celebratory laps around the Arc de Triomphe. But there’s little drama or glory in that. Plus, the incredible scenery is the payoff. The Tour’s enchantment is the variation in terrain and the challenges that come with it—from idyllic lavender fields to the jagged Pyrenees and every ancient monastery in between. And the only way a cyclist gets through those 2,081.5 miles is the same way a writer gets to an 80,000-word manuscript—one pedal stroke, one sentence, one word at a time. So might as well hunker down, pay attention and savor the journey, especially when passing through a fairy-tale landscape of old stone walls framing tree-lined roads in medieval towns.

Like cycling, writing takes you places, real and imaginary, and that’s the endorphin rush. Both will get your heartrate up every now and then, and likely also break your heart—the agony of defeat, of submission rejections, of losing by a hair at the finish line after three-plus hours of neck-and-neck all-out effort. Watching the Tour riders is like reading the prose of Louise Erdrich or Tostoy—humbling, but also inspiring. I will never don the victor’s yellow jersey, and will likely never win a Pulitzer, but I can give it what I’ve got. An additional reality check: sadly, a steady cadence on the keyboard may not get you down to zero body fat, but it can change how you see the world around you. So keep your eyes open, senses alert, catch on to the wheel in front of you, and Allez! Allez! 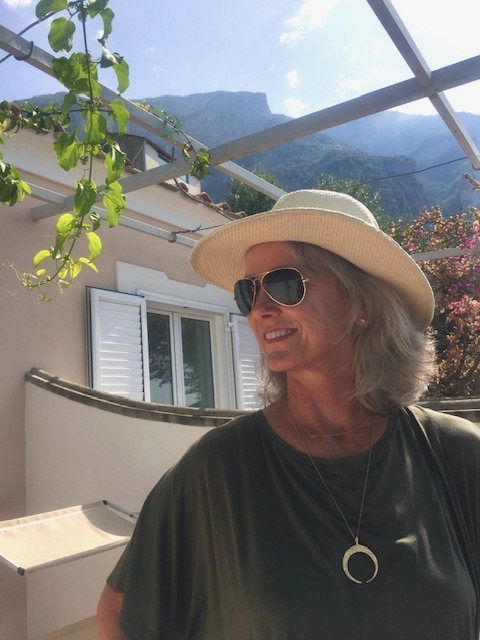 Stephanie Hunt is a Charleston, South Carolina-based freelance writer and editor, and editor-at-large for Charleston Magazine. She’s a former senior editor and columnist for Literary Mama, and her work has been published in The Washington Post, Veranda, Coastal Living, Communication Arts, and numerous other outlets. See more at stephaniehuntwrites.com and follow @stephhuntwrites.