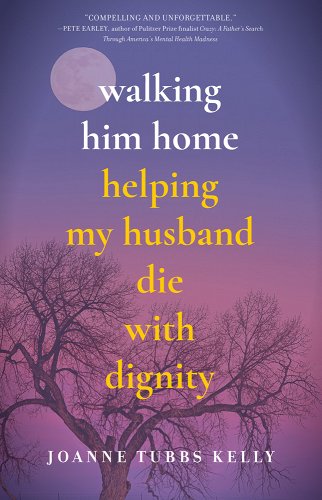 Joanne Tubbs Kelly’s husband wanted to die. And he needed her help to do it.

In her memoir, Walking Him Home: Helping My Husband Die with Dignity (She Writes Press, 2022), Kelly details the loving, mid-life marriage she shared with her husband, Alan, and the challenges they faced after his diagnosis with a rare degenerative neurological condition. As his physical and mental states deteriorate, he makes his wishes clear: Alan needs his wife’s help to use Colorado’s medical aid in dying (MAID) law.

His job is to apply while he is still competent and physically able to ingest the deadly cocktail his doctor will prescribe. Her job is to arrange it all – and to wrestle with her ambivalence. How can she refuse to help him avoid the suffering that will accompany his inevitable decline? How can she agree to help him die?

Kelly nods to the differing opinions about end-of-life care and the friction these opinions can create; however, at its core, Walking Him Home is not an examination of the debate over end-of-life care. To the Kellys, there is no debate: For terminally ill people, a compassionate death – one designed with safety, comfort and a measure of the sick individuals’ control over the event – is not only their legal right in Colorado, it’s a gift of love.

Instead, Walking Him Home is essentially a love story that picks up at the point of a marriage when “in sickness” is “all the time” and “’til death do us part” is literally scheduled on the calendar: January 11, 2020. This is one story of what can happen when gauzy vows of commitment come into sharp, painful focus.

With straightforward prose, Kelly details the steps leading up to and including the moment of Alan’s death, while also providing context for their relationship, his condition and the nature of caregiving in the face of a planned death. After opening with the scene of Alan ingesting the fatal drug cocktail on January 11, 2020, the memoir jumps back to 1993, retracing the history of the couple’s courtship. The bulk of the memoir is told in fairly linear order, with some time shifting to provide context. Kelly organizes the book in chapters, and also marks sections within chapters with month and year “time stamps” throughout, keeping the reader oriented in time.

Kelly is at her best when she uses elements of scene-building and dialogue to both convey information and to highlight her personal relationship with Alan. Here, after describing a morning cuddling and reading the paper together, Kelly describes the steps her husband must take to maneuver safely out of bed, steps that he is still getting used to:

When it was time to get up and face the world, Alan practiced what his occupational therapist had taught him for getting out of bed: knees together, roll to the edge of the bed, and pivot to a sitting position. Only he rolled too far and ended up in a heap on the floor. He laughed so hard he could hardly breathe.

“Ooh, I needed that,” Alan said as he caught his breath.

“What? You needed to fall out of bed?” I asked with incredulity.

He erupted with laughter all over again.

This type of concise narrative successfully delivers a wealth of information to the reader without over-explanation: Alan’s physical needs are increasing, but his sense of humor is intact. And the reader understands that the couple’s moments of loving connection will be increasingly overcome by moments of needing help, no matter how positive they both remain.

In another powerful scene, Kelly uses elements of setting and short dialogue to show the moment in Alan’s nursing home room when he declares his decision to put the MAID process in full motion:

When I returned to Alan’s room in the late afternoon, he was almost always sitting up in bed watching TV, the reflected light from the big screen dancing across his face, flirting with his rumpled sheets…Two weeks after the glasses repair incident, when I returned to Alan’s room after his nap time, it was still dark and quiet…As I snuck across the carpet, his voice startled me. “Hi Sweetie,” he said with tenderness rippling off the edges of his words…“It’s time. I’m out of juice.”

As in the examples above, Kelly’s use of dialogue is most effective when it shows personality, rather than provides explanation, as it sometimes does earlier in the book. In fact, as the memoir progressed, Kelly seemed to hit her stride in this regard. I felt I got to “know” Alan best through dialogue, where his humor, good-naturedness and resolve is evident. Consider all that is conveyed by Alan’s response to a loud conversation on the morning of his planned death: “Hey! Keep the noise down in there! We got people trying to die in here!” Dialogue is used here to capture and reinforce an essential part of who Alan was in just 15 words.

In these moments, Kelly skillfully lifts the narrative from the tedium of caregiving details to expose the underlying issue, which she describes as “losing him in slow motion.” A common danger memoirists face is misgauging which details are important for the reader and which are important only to the author. Having myself been in a position of “managing” the deaths of terminally-ill loved ones through hospice and palliative care, I recognize the obsessive, hypervigilant nature Kelly’s narrator portrays – the kind of detailed interest in, for example, recurrent urinary tract infections, catheter types, assistive technology, and frustrations with caregiving staff. There’s a level of panic underlying the delivery of such details, born out of a fear that many caregivers don’t verbalize: If I do something wrong as the person “in charge,” someone I love will die. So here’s the list of things I did to try to keep them alive.

Used carefully, the depiction of this type of compulsive thinking can establish the narrator’s obsessive frame of mind, or invoke resonant frustration in the reader reflecting the narrator’s experience. When your partner is that sick, your mind really does run through every detail about phone calls, appointments, medication lists and your fears about your relationships with extended family members.

And here is where Walking Him Home proves most powerful. Kelly is willing to talk about these issues, not just to her specialized support group, where everyone shares the same interest in atypical-Parkinsonian disease. She shares it with readers, who will likely face at least some of these challenges as we age, regardless of diagnoses. With honesty, intelligence and humor, she opens the door for these conversations.

And somehow, she is still able to show us “Joanne and Alan,” real people whose relationship faced an inevitably sad end, and their determination to face it, lovingly, together. With Walking Him Home, Joanne Tubbs Kelly bears witness to the experience of helping a loved one die with dignity. While this memoir doesn’t read primarily as a tool for advocacy, Kelly’s personal portrait of what it means to walk her beloved husband “home” is a powerful testimony not of despair, but of loving release.

Though the book might have benefited from a somewhat tighter edit, Walking Him Home will ring true for readers interested in end-of-life issues, navigating the American health-care system, and caregiving for loved ones with progressive and/or degenerative disease. Kelly’s work also provides valuable insight for medical professionals, especially those who work with palliative care patients and their families.

And readers and writers looking for models of genuine affection between a well-matched couple would do well to read this memoir. Although we know the devastating outcome from the very beginning, Kelly manages to avoid maudlin prose while still conveying the depth of the couple’s connection. Her love for her husband rises, again and again, above the catalogue of frustrations, exhaustion, rumination, and ambivalence that inherently accompany such a situation. Walking Him Home will leave many readers feeling hopeful – for Kelly, and for themselves. 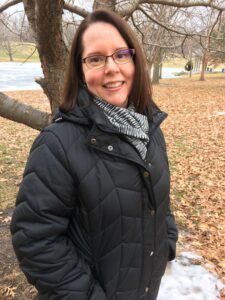 Susan Minsavage is pursuing her MFA from Wilkes University, where she earned the MA in creative writing with a concentration in creative nonfiction. A native of Pennsylvania’s Wyoming Valley, her essays explore family ties through the lenses of caregiving, Catholicism and coal mining. Minsavage teaches a Point of View in Nonfiction class through Wilkes’s Creative Writing workshop series, helping participants manipulate narrative distance and self-address to find the “best” self for scenes in memoir and personal essays. A singer, educator and speech-language pathologist, Minsavage is active in her classical music community and maintains a small private voice studio. This all sounds very serious. Sometimes, she’s funny.

1 comment for “REVIEW: Walking Him Home: Helping My Husband Die With Dignity by Joanne Tubbs Kelly”