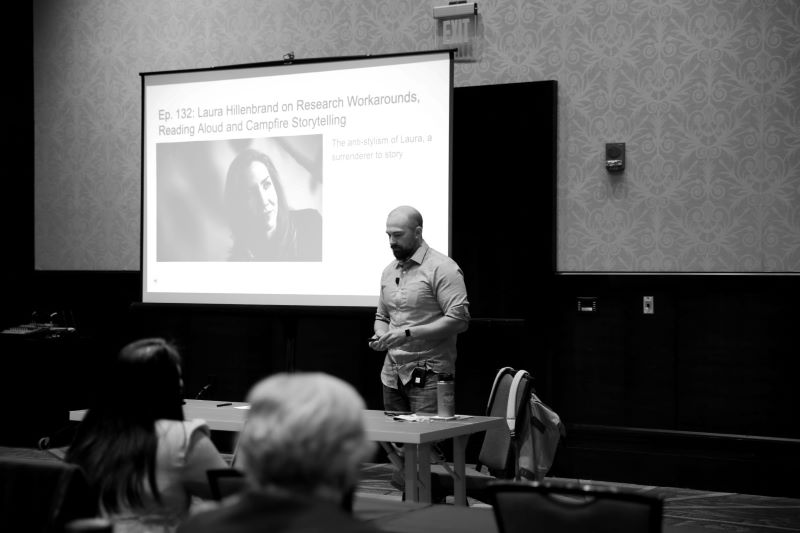 I put the phrase “Don’t get lost” on my wall of things I stare at when my cursor is calling me an idiot.

These words, spoken by Brendan O’Meara of The CNF Podcast, apply to so much of what ails us as writers. They are the thread connecting snippets of O’Meara’s podcast interviews with nearly two dozen writers on various aspects of the writing process and life.

For me, the whole thing was like a big writerly hug.

In the words of Alexander Norman, “I aspire one day to have a unique voice and tell a story no one else can” (Episode 191).

We have to have those again-again-again moments, O’Meara says: “Drip by drip, our voice develops.”

Don’t get lost trying to be someone else.

You’ve got to rub your own stink on the page. Steven Kurutz (Episode 165) warns that books we love can actually be dangerous because they influence us too much.

It’s easy get lost the voices of other writers. Lilly Dancyger cites her David Carr phase (Episode 259) as an example of what O’Meara calls “voice creep.” I’ll just say I spent most of high school writing song lyrics like Cranberries singer Dolores O’Riordan. (Note: they were cringe-worthy.)

Don’t get lost in scores of internet browser tabs, index cards, reference books—pick your poison. You’ve got to get to the writing.

Research can be a method of “productive procrastination” but, as Bronwen Dickey says in Episode 45, when there’s no new ground to turn up, it’s time to move on. (Deadlines help.)

Don’t get lost as you’re trudging away, whether it’s your fourth or your twentieth draft: chase whatever it is that you need to say until you’ve said it. (Deadlines help.)

There’s a tendency to think writers have been struck by lightning bolts of talent and roam the world unlocking their word-hordes. In reality, Pulitzer-prize finalist Elizabeth Rush says, “I’m just like a mule. I show up every day and climb very, very slowly up that mountain. I’m not particularly gifted, I just spend a lot of time at it” (Episode 71).

When the pages flow like liquid, they didn’t come straight out of the pen that way. Mary Karr writes upwards of fifty drafts of a poem (Episode 100); Dinty W. Moore will get to draft thirty before he can finally say, “Oh, wait, wait, now I see what it’s about” (Episode 49).

Don’t get lost thinking the writing community is transactional, like there’s some kind of “karma boomerang,” O’Meara warns.

Jane Friedman notes that the writing community needs to function as an organism with all the parts working together (Episode 102).

Practice literary citizenship. Support your fellow authors because you like what they’re putting out there and you want to see more of it. You might just find they feel the same way about you. I couldn’t find the right meeting room for a session and you know who helped me? Another writer.

Chris Jarvis (Episode 169) says that for every nine shares of someone else’s work, he throws in one of his own. And the writing itself is only half of the job; the other half is plugging in to a community—and not just so they promote you! Carry the words of Rebecca Fish Ewan with you: “It’s not all about you and your book” (Episode 101).

Don’t get lost in envy. If you’re not careful, you can give up on yourself by focusing on what other people are doing/have done.

You can’t always help looking over another writer’s shoulder to see if what they’ve got is better than what you’ve got. But Elena Passarella says it best in Episode 254—envy is just too time consuming.

When I’m juggling work and my three kids (it works best if you swing them by their ankles), I jealously guard my mind palace. That doesn’t mean I don’t roil when so-and-so posts about an award, or what’s-her-name landed a publishing deal. Heck, sometimes just hearing a word count drives me nuts.

Jealousy is a normal feeling, sure, but you go ahead and let that thought cross the street so you can get back to work.

Or, turn it into motivation to get that same success for yourself. That way, other people can be jealous of you.

Don’t get lost in the scroll.

Social media wastes time and it fuels envy, which is “a fuel that doesn’t burn clean,” O’Meara reminds us.

At the same time, it’s a powerful marketing tool that lets you reach your readers. Anika Fajardo (Episode 149) has her daughter regulate her social media sessions. O’Meara recommends setting a timer, treating it a like a weekly show that you watch.

Don’t be a tool of your tools (In general, avoid being a tool).

Don’t get lost in thinking you’re not good enough and/or everyone else is better.

There’s nothing special about the writers further up the chain. They faced the page; they did the work.

Sit down and write because you know it’s what you need to be doing. 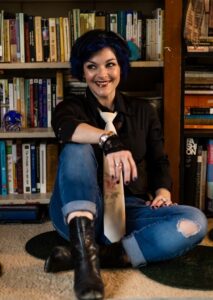 Leah McNaughton Lederman has created two volumes of Café Macabre: A Collection of Horror Stories and Art by Women (SourcePoint Press, 2019; 2021) and her own short story collection: A Novel of Shorts: The Woman No One Sees (2020). Her creative nonfiction has been published in The River and South Review and Defenestration Mag, and she was nominated for a Pushcart Prize for her essay “My Bleeding Heart” in the online anthology, What is and What Will Be: Life in the Time of Covid. Leah is active in several writing communities in the Midwest, where she lives with her husband and an assortment of children, cats, and dogs.