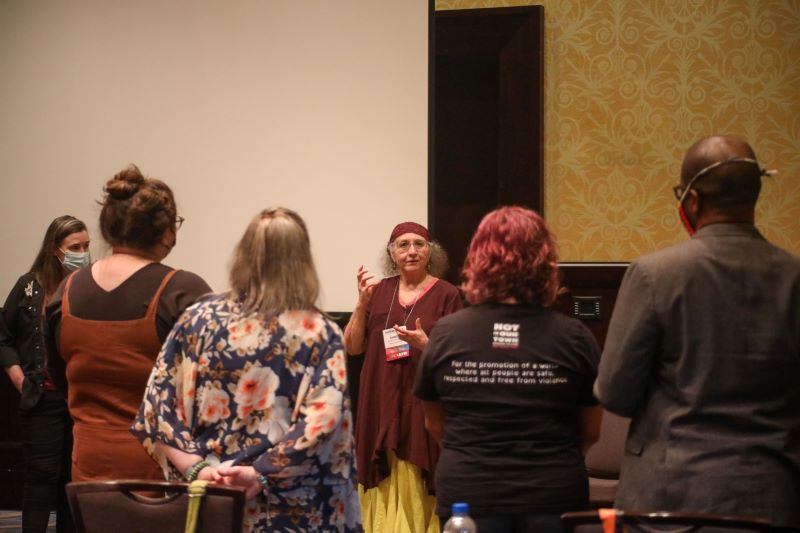 I felt the weight of the rough-hewn granite, making it hard to breathe.

It was a solid, cold rectangular block, probably no larger than a telephone book or two; the kind that get shoved into some corner for a few years, just in case, before they eventually collect enough dust to become an eyesore, and they’re thrown out.

It was a weight squarely on my chest, but invisible. My fingers stretched over the uneven edgers, investigating. I found where it started – somewhere just over my chin – and where it ended – flush with my collarbones.

It was right there in the Lancaster Marriott’s Heritage E, alongside about a dozen other writers, forming an off-kilter oval in the front of the room, who were exploring and feeling the air around them as they, too, found their writer’s block, personified.

Karen Carnabucci was guiding us like a bright-eyed sprite through the dark woods of each of our psyches, drawing out our vulnerabilities, asking us the tough questions, inviting us to feel and step into the shoes of our discomforts, our mortal enemy, the thing that held us back.

Karen asked us what our blocks looked like, how they felt.

One described the slimy but malleable goo that she had the power to manipulate, tossing it between her elegant fingers. A man said his block was shaped like a baseball, but it could turn from clear to opaque at will. One woman’s arms seemed to shake at the weight of her block; she precariously balanced it across her outstretched arms, her fingers turned claws, a blush spread against her palms, struggling to hold the weight.

Karen asked us to speak for it, describe its powers.

One woman, speaking as her block, declared that she was a force of protection; why even start if anything written could fail? It could be heartbreaking.

Knowing looks from many in the room went to her, as if to wrap her up, soothe her and uplift her. We knew that feeling, too.

And that wasn’t even the most transformative part of the hour we spent with Karen during her HippoCamp 21 session, “Break the Blocks, Find the Brilliance and Get Back to Writing.”

I’ve never been trapped in the immersive throes of psychotherapy before, but I imagine the work that was done in that room that day was something like a mix of a strong, communal acid trip and a 30-day stint in a five-star wellness retreat in a far off, exotic place.

“This isn’t a writing workshop,” the session description said. What an understatement.

When we trooped into the room at the session’s start, we arranged chairs in an oblong shape in front of the rows of black-clothed tables, gathering pens and notebooks as we settled in, readying them to scrawl down the wisdom Karen imparted.

But instead, we followed Karen’s instructions and she guided us through several exercises. Standing, walking around, greeting each other with and without our voices, and then with only gestures.

I stuck out a pointed finger for that last one, picking a young woman across the room from me, flexing, inching my finger back towards me, a beckoning sign too intimate between strangers that did what I wanted it to do – I saw her smile in her eyes, even though her mouth was covered by her mask, as she took a few steps towards me.

There was tension there for sure, but I felt comfortable. Karen made it feel safe.

It was then she had us discover our writing blocks, personify them and get to know them. I felt scared at first, but then powerful, as if I was meeting an ally that was with me always but I was meeting for the first time.

Our final task was to go searching. Karen let us in on a secret, her eyes lighting up: Our next writing project was here, she said. Our book, our article, our memoir. We just had to seek it out and we would find it.

Before she even finished her instructions, my eyes started scanning the room. I was always the kid in school who read half the directions, understood the gist, and got to work.

It was there, atop the blank projector screen that had been left unused during the session – my book.

I walked up, tentatively, wondering if I should instead feign that my book was on the ground at my feet, or closer to the safety of my briefcase and notepad near my chair pulled into the corner. I almost regretted spotting it.

At the base of the screen, I summoned my courage and gazed up. But it wasn’t there, situated in middle of the screen’s top, perched where I had spotted its glimmer moments ago.

As I continued to look, I realized the book was the entire space, taking up the blank of the screen and more. It was looming, powerful, overwhelming.

I felt small in comparison, inches away from what seemed like an enormous wall. It was my book, and it was frightening and beautiful and important. It was right here and better than I had ever imagined it as it sang in my brain, tickling at my peripherals for so many years. Complete, and more than I had ever hoped it would be.

I felt tears escape my eyes as I stared. My mask caught them, soaking them up.

When Karen ended the exercise, I shared my experience with the group, and it was accepted and validated.

As we left, a new friend leaned in close, nudging me, and speaking so only I could hear. 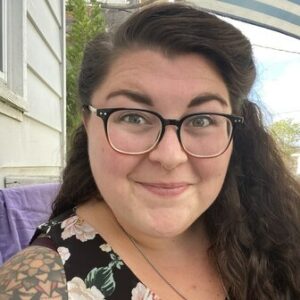 Molly Bilinski is a journalist currently based in Monroe County, Pennsylvania. Her bylines have appeared in the Reading Eagle, The Press of Atlantic City, and The Morning Call. For the past 10 years, she has worked as both a peer and professional writing tutor in Pennsylvania and New Jersey. When she’s not writing or reading, she’s baking or spending time with her three cats and her husband.