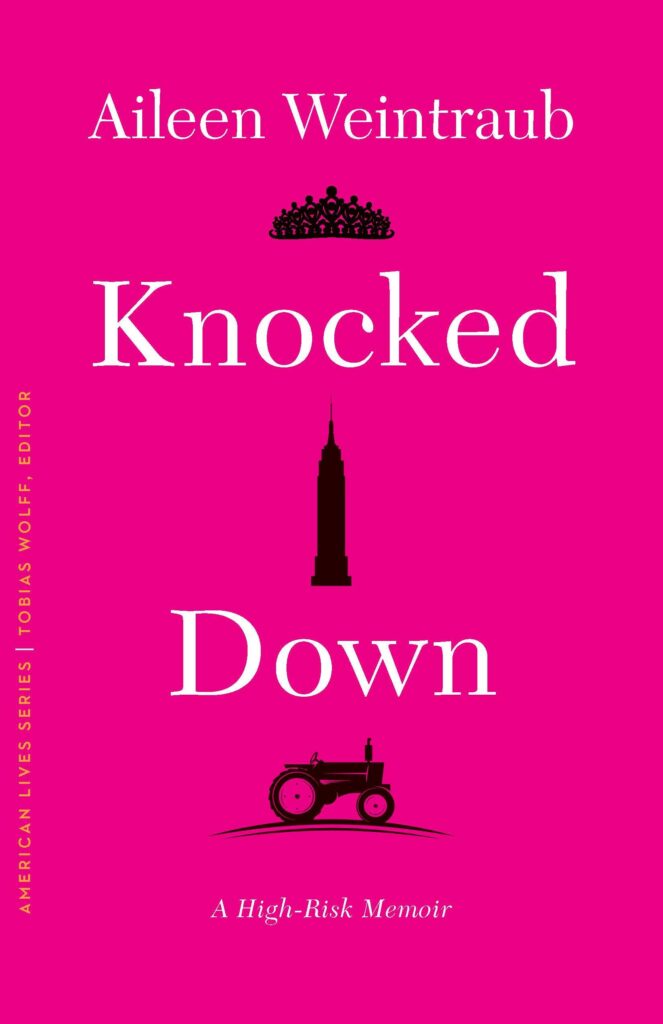 Aileen Weintraub’s memoir, Knocked Down: A High-Risk Memoir (University of Nebraska Press, March 2022), opens with the four-months-pregnant author and her husband Chris at an emergency OBGYN appointment. She is vulnerable and exposed–naked but for a ripped paper gown and spread-eagle on the exam table. This was the first time her husband had seen her in stirrups. “So much for maintaining that air of mystery,” she remarks. This seems analogous to the position that a memoirist assumes vis a vis their audience when writing any complex and true story. Privacy, what privacy? Weintraub signals from the start that she is inviting us on an intimate, awkward, funny, and fraught journey.

Such nostalgic lighthearted keening is quickly forgotten when the doctor gives her the news: Monster Fibroids, the source of pre-term bleeding. Two football-sized fibroids and another tennis ball-sized one are growing in her uterus alongside the baby, and as a result, she has an incompetent cervix which means the next five months on bed rest. Even then, the doctor offers a warning: “There’s a good chance you won’t be able to support a full-term pregnancy. You’ll be tremendously lucky if your baby makes it to 24 weeks.”

Chance and luck. A pregnancy that begins in such hopeful surety (“We planted a seedling,” she whispers to Chris) is now dependent on fortune’s spinning wheel and five months of extremely limited mobility. Knocked up? Yes, but also simultaneously knocked down—Weintraub is flattened by fear and uncertainty. She discovers in her Googling that of the almost one million pregnant women labeled high-risk, 70 percent wind up on bedrest, forced to “check out of life as they know it, lie down, and wait.”

This initial pessimistic diagnosis could have tipped this story toward a somber and sober countdown, ticking off weeks with dread and anxiety. Indeed, the memoir is 38 chapters long, a nod to the 38 weeks of a “normal” pregnancy, and we follow along with some trepidation and then relief with each passing week. As Weintraub’s pregnancy moves further toward viability there are new health crises. However, we also know that Weintraub is plucky and courageous. She once quit her job at a children’s publishing company and, on a whim, booked a trip to Alaska, strapped on crampons, climbed a glacier, and with the help of two strangers, was suspended over a “deep, plummeting crevasse” so she could “peer into oblivion.” When she sees “the hard, unforgiving ice and the blue water rushing beneath…the permanent and the temporary, the sharp edges and the sacredness of it all” she knows she will never work in an office cubicle again. Later she moved with her husband into his family’s dilapidated old farmhouse in upstate New York, far from her New York City family and friends, making a go at rehabbing the house, starting a business, navigating a new marriage, and forging a life off the city’s grid. All of which is to say that Weintraub’s story of a high-risk pregnancy is also a seriously funny meditation on the risks we take to live more connected and meaningful lives.

What to expect when you’re expecting? In this memoir? Always expect the unexpected (even a bat stuck in Weintraub’s curly hair!). I don’t wish to give away the suspenseful facts of this 38-chaptered journey hinging on Weintraub’s uncertain pregnancy progression.) However, in addition to the pregnancy narrative, we also learn about the realities of a fixer-upper farmhouse and the ways such an undertaking, especially when orchestrated from bed, can test a marriage. In one hilarious outtake, Weintraub introduces us to the washing machine, located in what is dubbed the “Basement of Death and Despair.” The machine was never connected to the waste line and hence drains into a barrel which must be emptied halfway through the cycle. The buckets of water then must be lugged outside and emptied in the far end of a field. There is a cascade of problems with the front door, the deck, the plumbing, the ceiling rafters, the electricity, the air conditioning, the floors, the walls, and their new tractor business which is drowning in debt and besieged by needy clients and impatient banks.

The joists of Weintraub’s marriage threaten to buckle under these various strains and pressures. To spice it up and rescue it from the tedium of bedrest survival mode, Weintraub, self-named “seductress of Ulster County,” buys a self-help marriage book meant to change “the arid desert of [their] love to a lush landscape of amorous escapades” via “spicy challenges.” Bumpy pregnancy and bumpy marriage but Weintraub is undaunted.

I would be remiss if I didn’t point out that Weintraub’s marriage and parenting story is not the only such story in this memoir. With equal care and attention, she recounts her parents’ struggles as a couple, as parents, and as individuals trying to make a go of it in this messy world. She has imaginative reckonings with her long-dead father who offers her advice and support while she is hunkered down in bed alone for those many long months: “You’ve got this, Kabeen (his nickname for her),” he says; “Try not to screw this one up, would ya?” he teases; “You see, Kabeen, I told you, it’s all been taken care of.”

Knocked Down is a big-hearted, hilarious, and moving account of staying put, rooting in, and learning how to persevere together—as a married couple, as a family, and in community with others. Early on, Weintraub writes, “we’d learned our lesson regarding the fragility of our little farmhouse,” but what she also learns is that she is not so similarly fragile. She is a source of abiding strength and love and is, in the end, surrounded by “the sweet din of laughter.” 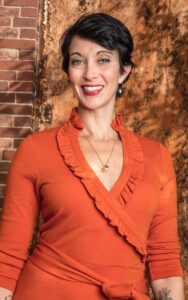 Kerry Neville is the author of the short story collections Necessary Lies and Remember to Forget Me. Her work has appeared in publications such as The Gettysburg Review, Triquarterly, The Washington Post, The Huffington Post, and elsewhere. She is the coordinator of the Undergraduate and MFA Program in Creative Writing at Georgia College and State University and is also faculty at the university. She received her Ph.D. in creative writing and literature from the University of Houston.

2 comments for “REVIEW: Knocked Down: A High-Risk Memoir by Aileen Weintraub”