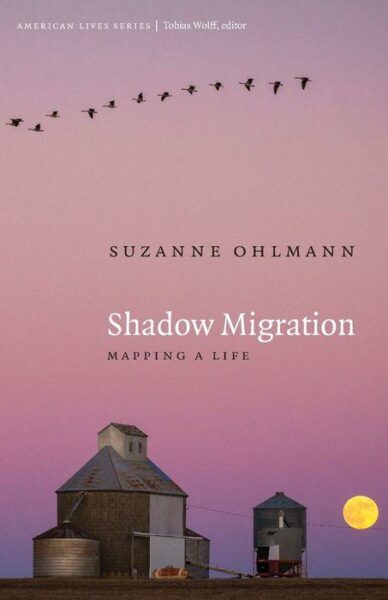 The opening pages in Suzanne Ohlmann’s Shadow Migration: Mapping a Life (University of Nebraska Press, March 2022) immediately introduce the reader to a sort of creative nonfiction in which real events and an almost surreal sensibility mingle freely. In these pages, we learn, a man dies inside his trailer home — the author’s biological father, we later learn — and his body is not discovered for several days. In the moment of death, however, we watch as his soul departs his body and “transforms into a luminous orb and shoots like a star across the western sky.”

This small orb traverses half a continent, from Nebraska to New York City, where it finds the author in a bar after an opera performance. She’s buying a drink for the baritone she has a crush on, and though she notices many details from the night she does not notice the soul of her biological father as it finds its way into a gin and tonic the two share. This “transmigration” seems to infuse Ohlmann’s experience that night with both a sense of loss and of being held by a father, a man haunted by addiction who never knew his daughter existed. It’s one strange and lovely connection Ohlmann makes in Shadow Migration, a book full of such connections. But this early moment sets the stage for a unique and moving book that doesn’t mind exploring the area between the objective facts of our lives and our more inscrutable shadow selves.

Though the book starts with this image of connection across great distances, Ohlmann’s own life, we learn, begins with a separation: her biological mother gave her up for adoption. Though Ohlmann is adopted into a loving family, some part of her never feels a sense of belonging. She writes that her adoptive parents, both small-town Nebraska teachers of Lutheran stock, are kind, if staid, people who “drink liquor on an every-other-decade basis, who spend years of their life singing in four-part harmony, and whose single classroom rule through forty-plus years of teaching is ‘Be appropriate.’”

Eventually, Ohlmann’s feeling of disconnect grows large enough to cast shadows, in spite of doing everything appropriately; isolated and prone to depression, she begins to wonder if her biological family is anything like her. “My heart yearns for them,” she writes in her journal. “I am alone in feeling.”

When it isn’t driving her into the arms of abusive men, this isolated feeling may also be what drives Ohlmann harder to connect with people: through music, her work as a nurse and writing. It’s perhaps also why we have this book, which documents Ohlmann’s own work to beat back the kinds of shadows that consumed her father by finding her biological family. “I walked my days with a secret,” she writes, “my heart was broken, too… If I didn’t take the risk to dig into the past, I’d be on the road to a life shortened by sadness.” Ohlmann starts sorting through decades-old adoption paperwork, visiting doctors and nurses who were on duty the day she was born, and tracking down social workers. She needs to find her way back to the beginning: to a point when “my birth mother did dropkick me, proverbially speaking, through the goalposts of life.”

Along the way, she finds many other kinds of kin: a musician in rural India who is like a father; a patient she meets on her psychiatric rotation, whose shadows are winning; a Hep-C ICU patient hovering close to death with whom she forges a surprising connection. These connections wouldn’t have happened if Ohlmann only hoped to “be appropriate” in her life, but then Ohlmann’s writing also betrays a level of reflection and self-work that doesn’t try to adhere to appropriateness, and this makes Shadow Migration such a thoughtful book. Ohlmann goes to great efforts to avoid vilifying and blaming; you get the sense there’s just this knotty internal dilemma whose resolution could release her from what haunts her. The book is also very relatable; although Ohlmann’s work is specifically engaged with her own adoption story, I think it will resonate with anyone who has felt a painful lack of belonging that threatens to send them spinning into the shadows.

One of my favorite aspects of this book is Ohlmann’s little leaps of perception, like that orb of light way back at the beginning. It’s a particular way of seeing that adds emotional resonance, but it doesn’t feel forced. Sometimes it’s even funny, like when she imagines her newborn self being delivered to the arms of her adoptive parents by way of a Der Viener Schlinger hot dog cannon. Chronology was sometimes confusing for me, but there was a regional feeling of the work that more than made up for it. The plains and people of Nebraska are such a presence here. Not just in the Willa Cather epigraph, either; there’s a sensibility woven into the book, a feeling that this home is both beloved and frustrating, like family can be. By the end of Shadow Migration: Mapping a Life, I felt a kind of circularity, as though coming back to this land was also part of this search for family, like Ohlmann’s own circle of kinship could extend past both biological and adoptive family, and maybe even beyond the human realm, too.