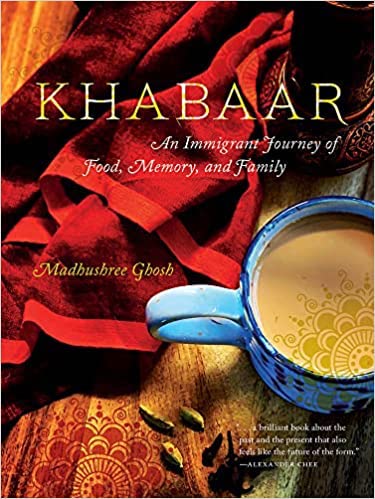 Madhushree Ghosh’s Khabaar: An Immigrant Journey of Food, Memory, and Family (University of Iowa Press, April 2022), is titled for the Bengali word for food. Even if we don’t know that going in, the cover image, depicting a steaming cup of fragrant chai on a rustic table, invites readers to join Ghosh as she lays out a tale that deftly braids the ways in which food has formed her identity and sense of belonging. At the same time, she weaves in other immigrant experiences from chefs, home cooks, and food stall owners. As with the most memorable dishes, food writing offers an opportunity for deeper exploration. In Khabaar, Ghosh also uses food storytelling as a tool for social activism, to explore the global journeys of South Asian food through colonization, migration, and indentured labor.

The early chapters are organized around key ingredients or dishes from the author’s childhood. Even if we didn’t grow up eating fish curry or goat curry, we recognize the nostalgic power that food possesses. We are invited to consider how our own early food memories not only transport us to a place and time, but how those experiences influence who we are and where we come from. It’s an example of Ghosh’s mastery of craft. Readers are invited to delight in the sensorial experience of visiting markets in Chittaranjan Park in New Delhi with her father, as they select produce, fish, and meat, and to revel in the pleasure of gathering with her parents and sister at their table to eat homecooked Bengali food. All the while, readers collect clues about what these dishes signify, how they shape the narrator’s identity, and how they will later solve her quest for belonging as she makes a life for herself in America as a daughter of Indian refugees.

A good portion of the book details how Ghosh preserves the memories of her parents and Bengali food while learning to cook new ones as she tries to gain the acceptance she desperately craves from her husband and his parents. Like many women, regardless of their national identity, Ghosh believes that if she can cook well enough and serve the right foods—basically the notion of getting to a man’s heart through his stomach—then she will have a successful marriage and a place to belong. As readers, we start to piece together that she is so focused on feeding and satisfying others, that she doesn’t recognize what she is truly hungry for, losing part of herself in the process.

Another of Ghosh’s masterful strokes is how she deftly toggles between the past and present. One of the most compelling examples is chapter 6, in which she captures the drama of being trapped in a bathroom, first as a child in a haunted lavatory at her auntie’s house, and later as an adult in a hotel bathroom before she’s due to give a career-defining professional presentation. The scenes add dramatic tension to the middle of the story, but they also serve as a powerful metaphor: Ghosh feels trapped in her own life. Even Ghosh is cognizant of this, telling the reader so. But it is the emotional truth and interior landscape that she captures on the page that allows the reader to feel the same aching realization along with the narrator: Though she sees that she is trapped, she is still not ready to confront the reality that she is in an abusive marriage.

Ghosh completes her protagonist’s character arc with a Diwali scene in chapter 9. She didn’t grow up celebrating Diwali, but it’s definition as a celebration of light and the triumph of good over evil, feels an apt way to mark her liberation from her marriage, which culminated in a bitter divorce settlement. Of course, there is food. Partly because Diwali is synonymous with an abundance of food—in this case, tikka masala, samosas, dal makhni, spinach paneer, cauliflower, and raita from Carlsbad’s Punjabi Tandoor, a favorite restaurant, and homemade naru, a Bengali coconut dessert—but also because food, and feeding others, is the way in which Ghosh instinctually knows to create ritual and meaning. By celebrating with her chosen family, made up of dear friends and members of her community, she is establishing a new tradition, one that brings her joy and one that will form the foundation of her evolving identity.

In the final chapter, titled “The Rituals of the Great Pause,” Ghosh finds herself at home alone, as many of us did during the pandemic years of 2020 and 2021. She starts a vegetable garden, paying homage to her father’s bountiful garden, even talking to the plants as he once did, and to memories of her childhood in C.R. Park. She cooks for herself, dishes such as tarot root curry and gluten-free mini naan, and in this generous and simple act, the reader watches as Ghosh learns to feed herself again, literally and figuratively. It’s a fitting end, especially as Ghosh reveals that the Bengali word for “again” is abaar. She writes, “No wonder “again” remains part of “food” in Bengali, because khabaar means we bring it to our people abaar, again. And again. And again.

In Khabaar: An Immigrant Journey of Food, Memory, and Family, Ghosh weaves together the story of her immigrant journey and what it means to belong, with beautiful food descriptions, tender renderings of family life under political strife, and honest reflection. In its pages, we know we are in the hands of amasterful storyteller (after all, as Ghosh tells us, Bengalis are natural storytellers) who doesn’t shy away from turning a microscopic lens on her own fallibilities, and who celebrates the triumphs of her own self-discovery of what it means to be a strong woman who belongs to herself.

Khabaar is for readers looking for a deeper understanding of how food serves as a platform to explore other topics, such as the immigrant experience, social justice, and self-discovery, for food lovers who relish descriptive prose and armchair travel, and for anyone who devours thoughtful, reflective writing set against a precise style of storytelling. 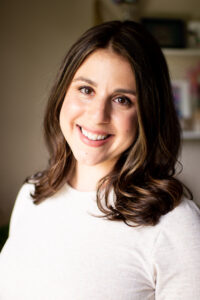 Layla Khoury-Hanold is a freelance journalist who has written for Food52, Food Network, and the Chicago Tribune, among others. She is currently working on her debut memoir. Follow her on Instagram @words_with_layla or on Twitter @words_withlayla.