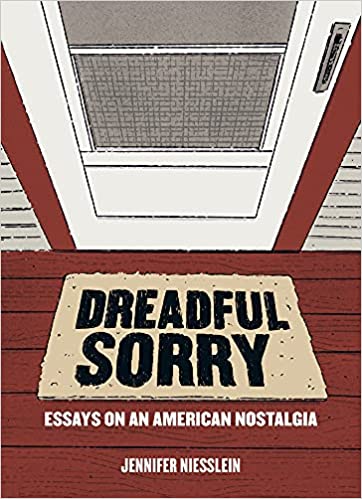 This collection of nine essays reads like a one-on-one conversation with the author, not just because of the candid and personal stories but also due to its conversational style.

Written in approachable prose that takes on an anecdotal tone, Dreadful Sorry: Essays on America Nostalgia explores the author’s roots as a white woman from western Pennsylvania who has lived in the South for most of her adult life.

Through these reflections, Jennifer Niesslein unpacks fraught topics like race, class, and gender, using the lens of memory and nostalgia. These topics notably bookend the collection with the essays “Before We Were Good White” and “Mighty White of Me,” though the essay “Hospitality” looks further. This last essay goes beyond the author’s personal familial history to observe social and class dynamics within the hospitality industry in the South. She notes how the violent legacy of slavery and “southern gentility” is echoed in modern work conditions at a historic luxury resort with what she calls a “plantation vibe.” Niesslein writes,

“And I start to put my finger on what skeeves me out about the words ‘southern’ and ‘hospitality’ in concert.” She continues, “I know there are about as many ways to be southern as there are people. But I do have an issue with those who consider themselves southern gentility. They’re the ones who have always benefitted from reactionary policies, the ones for whom the system worked in the past–and, in coming years, for whom the system will work under the Trump administration.”

She happens to be visiting the resort just days after the 2016 election, traveling with her husband and son for the latter’s prestigious high school band competition. The tone turns when she runs into her former music teacher. Nostalgia strikes again.

Niesslein works as an editor, and this undercurrent of editing runs throughout. Her first essay opens with, “That’s where they found her body.” This engaging first line perfectly piques reader curiosity. The “her” in question is a late relative, murdered mysteriously in the 1930s. While the collection doesn’t focus on true crime, this essay is a great start to introduce a thread that runs throughout: looking to our past to better understand our present. She writes, “Myths, of course, always represent the imagination of the mythmaker. I didn’t even know her first name or what she looked like, but I was eager to find a woman in my lineage who didn’t play by the rules.” This calls to mind the adage seen on everything from bumper stickers to t-shirts: well-behaved women rarely make history.

These essays reveal the author’s understandable impatience with respectability politics, demonstrating how conforming has not, historically, served the women in her family. However, we can sometimes romanticize struggles of the past. Niesslein was confronted by just that in a conversation with her grandma which humanized her with sudden vulnerability in this passage:

“My breath caught, realizing that this isn’t some historical curiosity, that I can’t stand on my middle-class perch and think that my research doesn’t have real-life ramifications, just as modern-day journalism doesn’t have ramifications for its subjects, especially ones whose names show up in the crime blotter, not the society pages, of the newspaper. My voice softened. ‘Your dad’s mom, Amanda, lived with you then, Gram. I bet she took good care of you.’ ”

She shows compassion in the gentle mothering of her family matriarch. Despite her journalistic efforts, a conversation with someone who lived that moment of history can reveal the subtext that even her research hadn’t unearthed.

From a craft perspective, distance is demonstrated in these humbling moments of investigative journalism, when the storyteller realizes she may never learn the whole story. She discovers another instance of this in “New Galilee,” connecting with a family member who tells his side of a story, revising the memories she held as truth. “I’m reluctant — so, so, reluctant — to make space for his memory alongside mine,” she admits. “My New Galilee only exists in my head.”

At the same time, the author acknowledges how her white privilege has served her and her family in ways that she is still learning to recognize. In “Mighty White of Me,” she explains how nostalgia can shield her from the realities of white supremacy woven into the everyday culture of her childhood.

She examines the parts nostalgia and memory play in this complicated reckoning. Her evocative memories root us in her childhood hometowns of western Pennsylvania with landscapes of coal and slate, cold and snow, and the colloquialisms of the region. Like the author, I’m a white woman born and raised in Pennsylvania who was on a learning curve when it came to examining white privilege, my own complicity, and the more sinister aspects of American history.

Reading this book reminded me how, among certain crowds during America’s 2016-2020 election cycle, “white women in Pennsylvania” acted as a punchline; this demographic was credited by exit polls for tipping the election in former President Trump’s favor in 2016, then vocally regretting it in interviews. I would recommend any readers grappling with that same learning curve to read this inviting and down-to-earth collection.

This book does not tiptoe around real-life issues with real-life consequences in order to comfort an imagined reader. She gets real. With honesty, humor, and an earnest passion that shines through her words, Niesslein reflects upon stories of the past with the hope of a better future.

Her hope for change is palpable; likewise, the author takes stock of positivity in the present. Crafted with an intimate tone, the essay “So Happy Together” takes on a mesmerizing lyrical quality. The repeated “we” acts as an incantation that casts a spell of serenity throughout the couple’s ups and downs. Positioned in the middle of the book, this essay acts as an intimate interlude. It is the stillness that allows for reflection. It also mirrors what she writes in the same essay, that, “In novels and in jazz, the big squishy middle is where all the interesting stuff happens. In our story, this is where we are now.”

Admittedly, the book’s introduction seems out of place, as if it should be an epilogue or part of another essay. It starts with a litany of family members, finances, and inherited property that seems at times a clumsy attempt to define a socioeconomic or geopolitical status that is maneuvered much more thoughtfully in later essays. The intro does, however, feature one line that truly sums up the urgent subject matter and direct tone of the collection: I have a nostalgia problem, and I’m not the only American who does.

At the heart of this impassioned book is the author’s attempt at personal responsibility through self-discovery. It’s as though she looks out over sea to shining seas of faces — many that resemble her own — in an attempt to connect with her fellow Americans and inspire them to make waves, causing a sea change and correcting the course of history.

Dreadful Sorry: Essays on an American Nostalgia is full of curiosity and compassion, just waiting to inspire an open-minded reader to reckon with the past and write their own next chapter in American history. 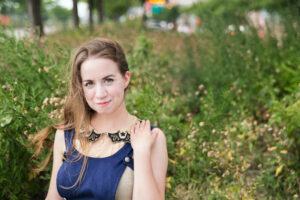 Kait Walser is a New York City-based poet, copywriter and reviewer. Her recent work appears in the Indolent Books series Poems in the Afterglow and the anthology In Absentia: Reflections on the Pandemic (Bicycle Comics, 2020). Kait holds an MFA from Wilkes University, where she won the 2013 Etruscan Prize. She has facilitated workshops, curated, and hosted readings for Union Square Slam and At the Inkwell NYC. Photo by Heather Kresge.