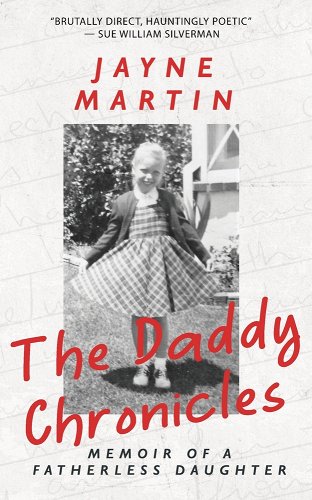 Like many fatherless daughters, myself included, Jayne Martin wasn’t without a father in the strictest sense of the term. It was the narrative of her life from which he was absent—and even then, the echoes of the absence resurfaced time and time again. In her new memoir, The Daddy Chronicles (Whisk(e)y) Tit, March 2022), Martin writes this narrative through flash chapters never much longer than a page or two, covering the emotional gamut in the way that this particular sort of grief can occur.

Over the course of 37 short sections, The Daddy Chronicles attempts to show the effects of the author’s relationship with her father —and, more specifically, her lack thereof. Taking the reader from infancy to adulthood — conception to adulthood, if you include the poem which begins the book—Martin’s vignettes maintain a consistent and articulate authorial voice while keeping things firmly in the perspective of the age from which she is writing. Martin is never one to waste a word or a scene and is well aware of the constraints of the flash form she has chosen for her work: the subject matter of each short chapter never strays far from that of the book as a whole. This may mean, at times, years are skipped between scenes. Still, the narrative and its arc are easy to follow, and the pacing mostly quite natural.

Martin’s approach to more traumatic moments is particularly graceful, projecting to the reader what is about to happen, where necessary, to an appropriate degree to avoid catching them off-guard in a way that could be damaging. And while her tone is often poetic or even playful, readers take heed: this is not a life without moments of horrific trauma. Throughout, Martin offers her experiences in stark honesty and is generous in her portrayals of those who have harmed her, leaving the reader to judge them appropriately based on their actions.

At under 100 pages, The Daddy Chronicles can — and maybe should — be read in one sitting, but this is one I would have liked to delve into a bit more deeply. This is not the worst problem for an author to have, to be sure. As I flew through her memoir, it was easy to see how Martin’s background writing made-for-TV movies has translated to an ability to write books of flash fiction, such as her earlier collection of microfiction, Tender Cuts, and now her memoir in flash. Just as TV movies aim to coax viewers to stay past a commercial break, the bite-sized sections of The Daddy Chronicles were each complete enough to put the book down at any time, but end in a way that keeps the reader saying “just one more.” While her writing leads me to believe she could execute a more traditional memoir with just as much style as this one, her voice lends itself well to the flash form, funny and profound in equal doses and never skimping on lyricism. Holistically, this all makes for a deeply enjoyable read, despite the heaviness of its subject.

It is worth noting that although works of creative nonfiction that focus on fatherlessness as a subject do exist, this one is a memoir through-and-through. While it is dedicated “to all the fatherless daughters,” this isn’t an analysis of what it means to be in that category—only of what it means to be Jayne Martin. It no doubt accomplishes its goal. For those seeking an effortless read that doesn’t skimp on emotional intensity, The Daddy Chronicles will not disappoint.

Jayne Martin was gracious enough to answer some questions for Hippocampus about The Daddy Chronicles and her writing process. 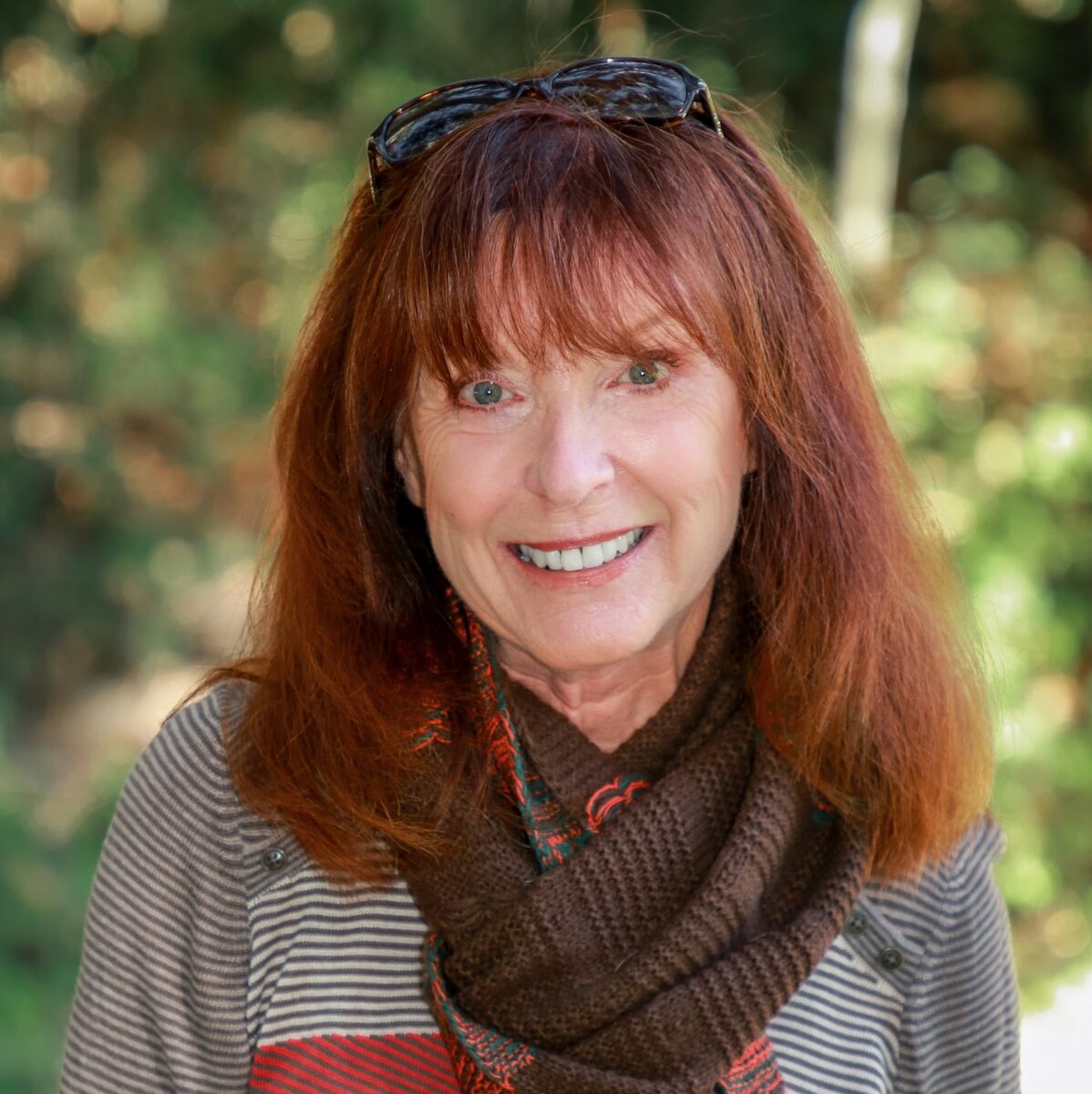 Allison Darcy:  Jayne, The Daddy Chronicles is told through a series of flash pieces, a form I know you’re experienced with: you’ve published and won awards for past microfiction and flash essays. The flash in this work form a linear narrative, yet could be read without their counterparts. What does it take for a piece of flash to both stand alone and work as part of a cohesive whole, as they all do here?

Jayne Martin: Flash is a form that invites the reader to participate, to have their own experience of the piece. It doesn’t seek to explain itself. It doesn’t tie things up in a neat bow. Akin to poetry, it relies heavily on sensory imagery in order to create emotional resonance for the reader.

To work as a cohesive whole requires some relationship between the pieces as well as a dramatic arc. In The Daddy Chronicles, the narrator’s progressive age forms the structure, while the piece titled “At the Stroke of Midnight” provides the dramatic arc. It is the point in the story where the narrator’s fantasy of her father ends and she goes from longing to anger. In the following story, her fantasy is that she is so famous and loved by the world that when her father calls, she’s too busy to answer. Thus begins a cycle of destructive behaviors that takes us through to the end.

AD: Could this story be told in a more traditional form—could you have written in that way? What would have changed?

JM: “Traditional” forms are much more reliant on exposition. For me, exposition is the booby prize. I don’t want to be told a story. I want to be immersed in it. I want the same for my readers. I’m sure this comes from the many years I spent as a screenwriter of movies-for-television. My writing roots are in the use of imagery. Toni Morrison is quoted as saying, “Write like a painter.” I love that, and honestly I know no other way.

“I don’t want to be told a story. I want to be immersed in it.” —Jayne Martin

AD: What conversations has The Daddy Chronicles brought about in your life since being published?

JM: Friends and acquaintances that I had not known were also fatherless have opened up to me about their experiences. For some, it’s been their first time really talking about it. Many have said that they recognized their own behaviors in reading about mine and had not made those connections before. That’s been very gratifying. When you look at the statistics, they are absolutely staggering. One out of three women identify as fatherless. It’s a silent epidemic because so many of us grow up feeling that we are unique in this loss and the feelings it produces. It’s a conversation we need to have on a larger scale. If The Daddy Chronicles does anything to further such dialogue, I really couldn’t ask for more.

AD: In one interview I read, you said that before you began to write the pieces in this, you thought you had dealt with your feelings toward your father. Do you think that now?

JM: I had dealt with them intellectually. I had buried them emotionally. So it was a surprise when so much anger and sadness came up for me in the writing process. That was my inner child. We all have an inner child and they often continue to influence our adult behavior. Mine was saying, ‘Hey, you may have dealt with this, but I’m still hurting.’ The book was really written by her and that goes to the previous question about form. She was finally able to have her say and, in doing so, released both of “us.”

Healing doesn’t mean we can change the past. Those scars will always be there. It means one learns to accept and adapt. I will always have intimacy and trust issues with men, but it’s no longer where I put my focus. It’s just one aspect that makes up who I am. At this point in my life, I’m far more bothered by the fact that I love to sing, but am completely tone-deaf.

AD: Recently, those of us in the United States learned that we might be losing our right to end pregnancies. In the wake of the possible overturn of Roe v. Wade, what does work like yours that explores fatherlessness give us to reflect on?

JM: I couldn’t begin to conflate the two. In my case, my mother very much wanted a child. Abortion was never a consideration. Certainly, if Roe v Wade is overturned, there will be children born that are unwanted by both parents. What effects that will have on our society is unknown at this point. 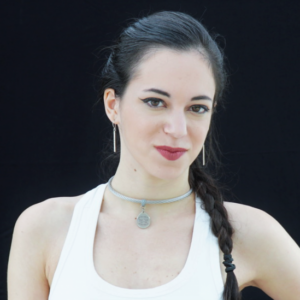