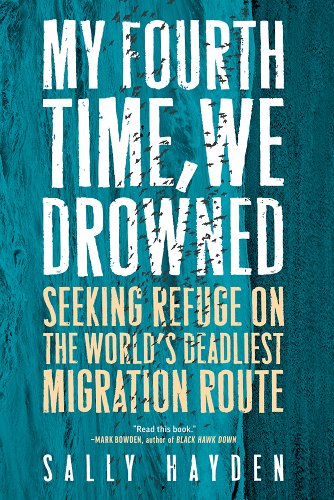 One question kept worming its way into my head as I read Irish journalist Sally Hayden’s new book on the African migration crisis: How?

How could people treat other human beings this way? How could major world powers knowingly contribute to such atrocities? How could the rest of the world let this happen?

I’ve been asking this question a lot in the past few months, and not just in relation to Hayden’s book My Fourth Time, We Drowned: Seeking Refuge on the World’s Deadliest Migration Route (Melville House, March 2022). I want to know how an unprovoked dictator can roll his tanks into a neighboring country, murder and torture innocent civilians, while the world barely wags a finger. How a white man can hate Black people so much that he shoots and kills ten shoppers buying groceries in a supermarket, how a teenager can walk into an elementary school and kill 19 children and two teachers, and how state and national leaders continue to do nothing to prevent future violence.

The officials and refugees whom Hayden interviews in her book posit numerous theories as to how such atrocities can occur while people in power look the other way. Two in particular stuck with me. The first, from an unidentified embassy employee in Sierra Leone: “The people in Europe, who are the ‘haves,’ are not going to be willing to equalize with the ‘have nots.’”

The second came from Eritrean journalist and activist Meron Estefanos, who has tried tirelessly to help refugees being tortured and held for ransom by smugglers: “We are black people. The world doesn’t care.”

It’s hard to briefly summarize the complicated and horrific situation Hayden details in her 357-page book, but here’s the gist: For more than a decade, thousands upon thousands of Africans have been fleeing the hopeless and often dangerous situations in their home countries, looking for a safer and more humane life for themselves and their families. They come from many countries, including Somalia, Ethiopia, Eritrea, Sudan, Nigeria, Gambia, Sierra Leone, and Niger.

For most, their goal is to reach Europe, a place they believe promises asylum, jobs, and freedom from oppression and torture. To get there, many hire human smugglers to move them to Libya, located a boat ride across the Mediterranean Sea from Italy.

Not surprisingly, problems arise when so many thousands of refugees started trying to enter Europe. Both the European Union and the United Nations have intervened to attempt to slow or stop the flow of migrants. But, as Hayden meticulously documents, they have made the situation worse.

The EU pays a “Libyan coast guard” to find and stop boats of migrants in the Mediterranean. The coast guard returns the migrants to the hopeless situation they’d left in Libya, which includes inhumane “detention centers.” Sometimes Libyan officials deliver migrants right back into the hands of human smugglers, who torture the refugees while attempting to gain many more thousands of dollars from their families.

It’s hard to imagine a worse place than the Libyan detention centers. Refugees are crammed by the hundreds into tiny buildings with only two or three toilets, are not given food or water for days on end, receive no medical care when they are sick or injured, are raped, and are tortured and shot when they dare to complain. Sometimes officials even house refugees in buildings containing large ammunition stores, essentially daring opposing military forces to bomb the buildings despite the threat to innocent lives.

Hayden started the work on her book after receiving a Facebook message from an Eritrean refugee who had a secret cell phone in one of the Libyan detention centers. He wrote, “Sister Sally, we need your help.” Hidden phones have become the refugees’ only way to seek help, their only link to the outside world. Much of Hayden’s incredibly thorough reporting of the situation comes directly from the refugees. For every government official who plays down the situation, Hayden finds countless refugees who refute them with a much direr account.

The migrants are lucky to have Hayden as their documentarian. She weaves historical research with her interviews with officials and the refugees’ own accounts of the horrors they experience, often in their own words. What results is an essential portrait of a crisis of unfathomable proportions, one that you can only hope will sway those in power to do something. Anything.

It’s hard to remain hopeful as I watch a dictator continue invading while the world just watches, gunmen continue slaughtering innocent people, and politicians continue refusing to change laws or policies to prevent future tragedies. One refugee in a Libyan detention center describes my feelings perfectly: “The world will not be destroyed by those who do evil, but by those who watch them without doing anything.” The question is, how long will we continue to watch?