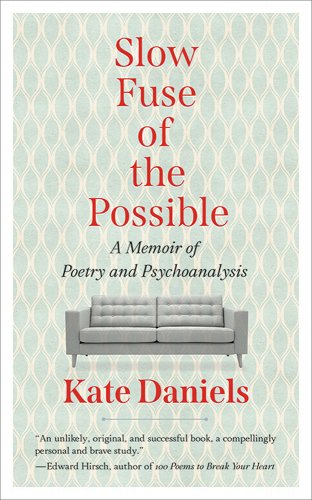 In setting out to write Slow Fuse of the Possible: A Memoir of Poetry and Psychoanalysis (West Virginia University Press, 2022), Kate Daniels’s “hope was to create a literary text that might suggest the feel and the form of one particular analytic treatment.” The result is that we are swallowed up by the delicate dance of dreams and reality as Daniels uses stream-of-consciousness, vivid imagery, and poetic mechanics to take the reader along for almost three years of infuriating and intensive psychoanalysis.

In the first chapter, we are introduced to the psychoanalyst, Ama, and immediately see the poetic touch. Daniels describes Ama’s name as “a fragile soul groan. Ama was Mama without the M. Someone had torn off her M as she ran away, and all that remained was Ama, this remnant, this rag.” We feel the weight of the missing M, the complexity of the alliterative “r” approximate, and the gravity of the author’s undertaking.

Although the chapters flow chronologically, the text within each section mirrors the jumbled, unsettling, and even frightening aspects of Daniels’s sessions with the analyst. The chapter titles ground the reader in what is familiar and known: the poetry of Emily Dickinson. Before psychoanalysis, Daniels often taught her students not about Dickinson’s works, but about her struggles and life as an artist. In Slow Fuse of the Possible, chapter titles are the “snippets of Dickinson” that the author describes as constantly racing through her mind. These snippets burrow into each chapter: Chapter 11, titled with Dickinson’s line, “It was given to me by the Gods – When I was a little Girl –,” focuses on a figure in Daniels’s analysis whom she calls “The Girl,” but whom Ama calls “The Little Girl.”

Daniels and Ama are, as we quickly learn, entirely unsuited for the partnership they have embarked upon. Ama is cold, distant, and in only the first year of a “four-year training program” when Daniels first approaches her. Daniels, whose family history of psychosis makes her doubt things she sees and believes about Ama, feels at once overwhelmed by and hungry for her sessions with the analyst. This mismatch mixes with the blurred line between conscious and unconscious to create scenes of uncertainty that play out across the chapters. The two sentences below fall only a few lines apart in the memoir, but Daniels memory has already shifted:

[Ama] said one day, “I think you want me to take your books so that a part of you can be alone with me when you’re not here.”

Ama had said, “You want me to take your books and keep them with me when you’re not here, so that a part of you will stay with me.”

This minor shift is impactful because the reader knows how important words are to the author. She writes books of poetry on the analyst’s couch and describes her treatment as being like a lyric poem because it could “go on writing itself forever, with or without me.” Ama, on the other hand, is reckless with language: another example of their opposite natures. Earlier in the memoir, Daniels recounts, “In speaking to me of my most debilitating physical symptom of depression – what I had always called the ‘bones- are-dissolving’ feeling – Ama remembered that I had said my bones felt ‘crushed’.”

After years of push and pull, Daniels begins to pull away from Ama and the chapter titles begin to vary. First they simply alternate between Dickinson and non-Dickinson chapters. One chapter is titled with a quote from pediatrician and psychoanalyst D. W. Winnicott, “There is no such thing as a baby. There is only a mother-and-a-baby,” to center the reader as Daniels confronts Ama for her lack of understanding about motherhood. Although the next chapter is titled with a Dickinson line again, soon, as Daniels sees a Famous Analyst, falls into a pit of depression, has suicidal feelings, and finally, starts Zoloft (which Ama opposes), the chapters move away from Dickinson entirely.

Toward the end of the memoir, Daniels recounts a weeks-long fight with Ama, “a dreary and nearly unalterable routine of attack / irritation / defensiveness / more attack / counterattack / traumatic closure,” with line breaks used, as she has to great avail throughout the writing. When the traumatic images that spared the fight settle, Daniels is free from her analysand-driven obsession with Dickinson, writing,

I no longer woke with a single line from one of her poems or a phrase from a letter skittering wildly through my mind, setting on fire my limbic system, and making it impossible to sleep or to concentrate on anything other than getting to the couch to share it with Ama.

Kate Daniels’s Slow Fuse of the Possible: A Memoir of Poetry and Psychoanalysis is a masterclass in the power of form and structure that conveys a full picture of analysis, “its creativity, its terror, its extraordinary, bifurcated potential for change: transformation or trauma.