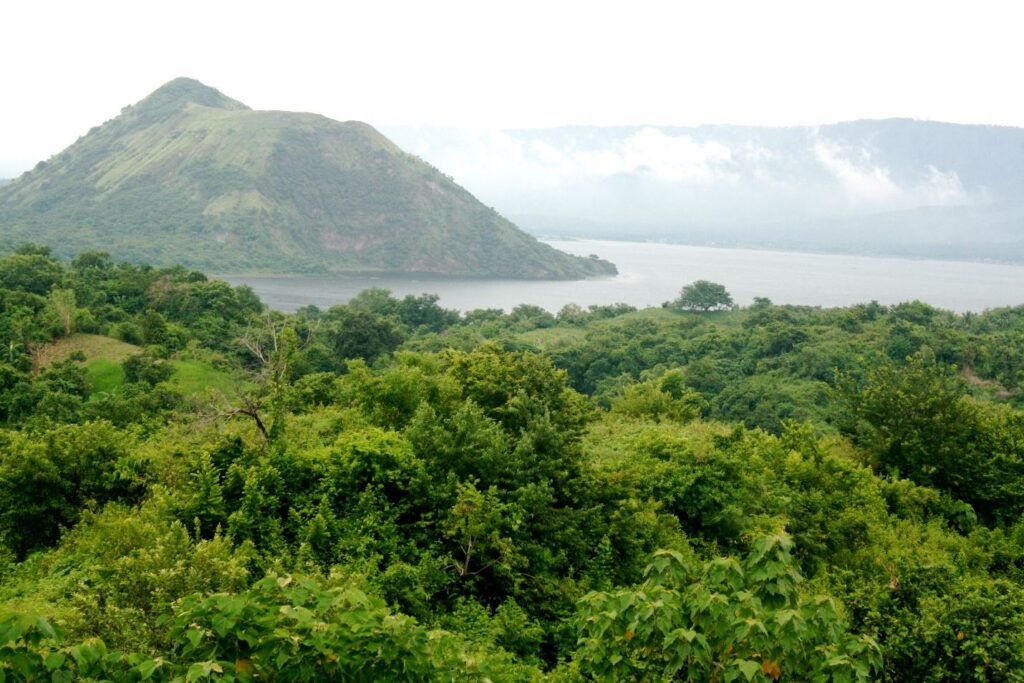 The night the volcano spewed ash into our lives, I dreamt about eating lava. It tasted like caramel or seared custard. My Bible study teacher sidled into the dream too and helped herself to some spilling over the crater, letting the rash-red syrup cover her hand. In the background, the trees fell on their sides upon contact with the lava, the fissure of bark and heat hissing like a coven of terrified snakes.

“It tastes like my father’s cassava cake,” she said, sighing. By the time I remembered she was German, the lava had sloshed onto her bare feet, lapping at her ankles. She smiled, or was in the process of smiling, bits of lava stuck melting in her Colgate-ad smile.

“Good,” I replied, watching the lava shift through her toes.

When I woke, the ash hadn’t snowed in my city, leaving everything a blank, dumb slate of normalcy. But when I stepped out, I thought I could hear the slight asthmatic rhythm of the air, choking silently on the phlegm of the volcano.

On the day we were due to move out for the third time, all six members of the family could be found wiping down the only bathroom, vacuuming the tiny plot of carpeted floor, and organizing room closets. Over the seven years we stayed in the U.S., our apartments shrunk with each move. We went from a spacious house dorm provided by the college my father studied in to a quaint furlough home half the dorm’s size, then to a two-bedroom apartment where my father often slept on the couch, squeezed out of the comfort of a bed. My father joked it was God telling us to move back to the Philippines.

By the time we had to leave, we were all ragged and rubbing dusty eyes, regarding the small 100-square-foot apartment like cows in the midst of grass-starved plains. The emptiness was unsettling. Our belongings were either in some donation drop box, in a bulging Balikbayan box headed to the Philippines, or stashed in our suitcases. And soon we would be in an airplane, watching oceans whir by as we approach a country I only knew in wisps of language and memory.

“Lord, thank you for this house,” my father prayed. I was the first one out the door.

Before our car left the driveway (for the last time, as my father emphasized), the uncomfortable sense of leaving something behind almost drove me out of my sweat-licked seat. Rationally, it was impossible to have left something; we triple-checked every room.

I forced myself to stay.

Today, I still feel as if I left something lying forgotten and desolate in some missed-webbed corner of the apartment. If I were given a chance to fly all the way from the Philippines to that squeezed suburb apartment in Illinois, I would take it. Anything to ease this shadow into a tethered existence.

Two weeks before the eruption, our family toured Taal. The panoply of dwarf mountains and volcanoes echoed more like a drowned god than a natural wonder. As the spindly boat sliced through the lake’s silent water, my father recited the usual tourist facts: Taal was a complex volcanic system, its throat reaching to the very bottom of the lake, and its last eruption was in 1977, etc. I thought of boiling water, the sulfur pressured into cracks. I did not believe in polytheism, but the impenetrable blue waves stank of air and a presence I could not define, berating me for trespassing on its body.

When the water spit on my face, I almost apologized for my intrusion as if the fallen gods had no lake to expand into.

I check Facebook Messenger. Everyone is posting safety reminders in the group chats and following each cardstock image are a variety of messages ranging from No school yessss to Can the ash really hurt me?? It doesn’t matter where the ash falls. Everyone wears a mask. Everyone feeds on the ash. It is an exciting change after decades of stuffy, polluted Manila air. Still, because we live far enough away, my parents push through with the original plan of touring our American guests around Manila.

On Messenger, someone complains about the ash in his garden. Unlike me, he has never dealt with snow before, has no idea that the ash will not melt, but will scatter and disappear. No one waits for the wind. Maybe we are all just sick of air.

Our Taal tour guide had lived on the island her entire life. I wanted to ask her if she could remember the last evacuation forty-three years ago; if, as a foaled girl, she ever looked back into the ashes and hoped it would dissolve in the wake of destruction; if she regarded the god with fear or hatred or ambivalence; and if she ever raged and screamed and cried when her parents decided to drag her across the lake of that sinister half-asleep half-alive being.

Instead, my mother talked to her about the chickens running freely on the beach and the horses they raised and rented to those who couldn’t make the long trek to the volcano, being more comfortable in my first language than I could ever be. Before she gave up and rented a horse to ride to the crater, my mother walked in step with the guide, speaking to her as I trudged behind, where I focused more on understanding the foreign words than the climb. She learned they had no school on the island because there was always the volcano to tear the roofs down, that they sent the kids across the lake every day to learn something they could use to pull them out of this place. Before she could ask more, my mother mounted a horse and left us.

I wanted to apologize to the woman, but what could I say? Sorry my mouth has forgotten our language. Sorry my tongue has been trained into English hills for the past seven years. I’m sorry, sorry, sorry, so sorry. Neither she nor I would have understood why I apologized.

Still, if I had known the words, I would have.

The only time I cried during a move was in the process of cleaning. We had moved two times before and grieving for the third house held less appeal than leaving it. As I hauled and overturned boxes of storage junk rotting in a covered corner, the whisper of the coming move-out day steadily filled the rooms. Its presence suffocated and weighed until I shouted at my sister to move faster, the pressure finally releasing in tears.

“She’s overwhelmed,” my father explained to my bewildered sisters. All I felt was the relieved bursts of consciousness over our second furlough home’s vast backyard: long afternoons spent sharing secrets with friends on the grass, the constant flare of our screams as children played tag, the quiet smiles our doorway always greeted us with. I didn’t grieve for the second house before we left either, nor did I cry when we left its driveway “for the last time.” But I left something there, too, which was also impossible because I had searched every room before leaving and found nothing but forgotten dust.

“Batangas declares state of calamity due to Taal Volcano eruption”

In the word “thousands,” I search for our middle-aged guide whose sturdy legs kept an aloof pace while wearing slippers, her hands caught in the corner of a shawl-scarf she kept around her neck. I stare at the pictures of women and children frozen in a run, the absence of mouths hidden behind masks accentuating their scrunched doe eyes.

She appears in hints: a woman bearing her same sturdy legs, another wearing her face of stoic fatigue. But the headlines and the pictures reveal no measure of existence, just one unnamed woman after another, body poised in duress saying you will not find her here, this woman of composure; saying today, there is not one who doesn’t breathe without screaming eyes.

There were wood chips on the shores of the Taal when we arrived, scattered like bodies of boats whose muffled motors had roused the drowsy lake god. Next to the boat, my sister pointed out the carcass of a fish, its open mouth the smooth edges of a tombstone. The residents glanced at us like expectant midwives waiting for the baby to slip out. As we walked, our Crocs smudging the ashen sand, we were briefly interrupted by the entourage of a mother hen leading her fledgling chicks to the shade, clucking unhurriedly closer to the volcano, as if the crater drew everything on the island.

When we came back from the hike, weary and drenching our thirsts with the sweat on our brow, we saw the fish by the boat still staring. No one pointed it out. This time, I understood what I left behind.

Tonight, I will dream about asking the woman. I will only ask her one question, and though she will not say anything, we will both know the answer.

In this dream will be the phantoms: horses that are safely on the other side, not gawking at the ash or running to taste the lava to know if it was, as in a dreamlike delusion, just hot syrup; chickens that do not lead a steady pilgrimage into the center, who will not burn when they step on the lava, who only marvel at the thick density of it all; a woman who will not cry the words my life my life as if she can flee back to that place of origin to recover it, to apologize, or to curse it; and, in watching, I will forget all the ghosts and shadows I’ve left in those houses.

No, we will be silent, the roused gods passing gently into sleep. 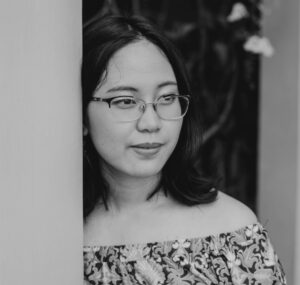 Yvanna Vien Tica is a Filipina writer with a hearing impairment who grew up in Manila and a suburb near Chicago. Her poetry has appeared or is forthcoming in Verse Daily, Poet Lore, Shenandoah, Poetry Northwest, The Rumpus, and Salt Hill, among others. She reads for Muzzle Magazine, tweets at @yvannavien, and will attend Yale University in the fall of 2022. In her spare time, she can be found enjoying nature and thanking God for another day.