“The body is the instrument of our hold on the world.” ― Simone de Beauvoir, The Second Sex

In Shakespearean times, it was commonly believed the body comprised four humors: blood, yellow bile, black bile, and phlegm. While it’s hard to imagine reading a memoir heavy in bile and phlegm, body humor offers substantial opportunities to both lighten up and enhance an otherwise dark memoir through unexpected contrasts.

Often when we think of physical comedy, we think of the visual: Jerry Lewis slipping on a banana peel, Charlie Chaplin hanging off a clock, or the Marx Brothers having a slap battle. But in literature, physical comedy may be slapstick or it may use subtle references to body functions or abilities that connect us deeply to the narrative.

For example, in the memoir The Brand New Catastrophe, Mike Scalise’s narrator goes against doctors’ advisement to travel to a wedding twelve days after having a pituitary tumor removed. He is only at the beginning of his adjustment to his new reality and far from physically recovering from the surgery when he faces the other guests’ reactions. In this scene, Scalise uses physicality as a contrast to the formality of the wedding to create humor:

The details of my mass email had been passed along to many of the rehearsal guests in spotty, dubbed-tape ways. It was a telephone game of illness, where the only word  anyone remembered was tumor, which meant that those who’d caught wind approached Lauren and me with the meekness that might be a friend’s just widowed parent.

I told everyone that I hadn’t taken a shit in two weeks.

In just a few short words, by going to physicality, Scalise sets up several contrasts between the ordinary and the extraordinary that lead to incongruous humor. There’s a wedding, which, while extraordinary in the lives of those going to it, includes ordinarily accepted rules and expectations of formality. The crassness of poop humor and the narrator’s language contrast with that formality. Yet going to the bathroom is the most normal thing in everyday life. Additionally, the guests are displaying their cerebral tension trying to figure out how to relate to Scalise’s life-shattering experience and following the normal desire to express their emotional concern. The basic, authentic body humor offers a needed contrast for the characters in the scene. Scalise’s body humor reassures the guests and the reader.

The Scalise example brings in body humor to contrast with a serious, very formal, and proper setup. Jenny Lawson’s Furiously Happy offers an example of the opposite, where the body humor is part of a comedic setup that leads to a more serious response. The following scene is part of a chapter describing Lawson’s significant struggle with insomnia. Lawson has been awake nearly all night, got up to take her daughter to school, and lay down for what was intended to be a brief nap before continuing with her day. The alarm she set for herself is going off, but both her arms are asleep.

I managed to Frankenstein myself up into a sitting position and kept tossing my helpless arms near the snooze button, but it wouldn’t work and it got louder and louder and I could hear Victor angrily stomping toward the bedroom, yelling, “Oh my God, ARE YOU STILL IN BED?” I didn’t want to tell him that not only was I still in bed but also my arms weren’t even awake yet, and so I panicked and quickly rolled off the edge of the bed to hide behind it. Obviously I wasn’t thinking straight because I forgot that I didn’t have arms to help catch me and so I landed facedown with a dull thud and that’s when I realized how helpful it is to have working arms. You never think to appreciate arms until you need them to stop the floor from punching you in the face.

Lawson’s fall off the bed is classic slapstick. The description of “facedown with a dull thud” and “tossing my helpless arms” is in the same character as an I Love Lucy scene. Her narrative quip about “stop the floor from punching you in the face” seems like it should come with a laugh track attached. From other interactions, we know Victor’s annoyed anger is harmless. It has the same tone of Desi Arnaz saying, “Lucy, you got some ’splainin to do!” If she wasn’t possibly getting hurt, the scene would be pure classic comedy.

Humorous contrasts fuel the slapstick: the oddity of having both arms fall asleep at once faced with the normality of a husband who’s irritated because an alarm keeps going off while he’s trying to work. The normality of hiding faults with the abnormality of not having a way to catch herself when she lands.

This physical comedy plays an important part in advancing a deeper theme of the book: Lawson’s choice to be “furiously happy” despite truly disabling mental and physical health conditions. Having both arms fall asleep serves as a safe metaphor for other times when her mental illnesses are crippling. Her choice to turn it into a highly comedic story is an example of her conscious choice to answer her mental health challenges with humor.

The slapstick continues for two pages as a setup for this moment of still-funny but deeper analysis:

Victor claims these kinds of things don’t go on in normal households, but I’m pretty sure this entire incident could be blamed on the fact that I have several real-life sleep disorders. This is not too surprising considering that I collect neurological disorders like other people collect comic books. Basically I’ve become so talented at having disorders that I can literally have one in my sleep.

Lawson is still being humorous with her narrative commentary “I’ve become so talented at having disorders that I can literally have one in my sleep.” Yet the slapstick humor has set this up to also show that this moment is difficult underneath the funny. It is the tipping point for her to finally go see a sleep specialist and find treatments for her disordered sleep. Her slapstick doesn’t take away the seriousness of the challenges; instead, it shows a strength in facing them.

In The Art of Memoir, Mary Karr states, “In writing a scene, you must help the reader employ smell and taste and touch as well as image and noise.” Physical comedy offers a chance to bring the reader into their body, feeling the humor of the book, even as it serves to deepen understanding of the story through metaphor.

This is the first in a series of four pieces on using incongruous comedy in dark memoir. 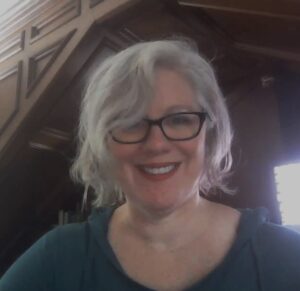 Susan Mack is a professional writer, storyteller, LGBTQ+ advocate and coach. Her work can be found in the Rio Review, Brainchild Magazine, and Rubbertop Review. She is co-producer of Austin’s Stories on the Lawn storytelling show and is currently working on a humorous memoir entitled Three Months. She’s pursuing her MFA in creative nonfiction at the Vermont College of Fine Arts. Follow her on twitter @susanmackwrite1.