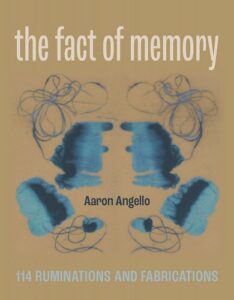 I am not one for writing prompts. My overactive imagination and my stockpile of (unwarranted) regrets will likely keep me writing forever, but I understand the appeal of a prompt.

Prompts lead you into unconsidered territory. They flex your creativity

I had lost my bed to the dog, for example, is a fascinating prompt that would lead me perhaps to memories of my aunt’s English sheepdog, Maggie, or the adorable corgis, Bentō and Chopsticks, that friends own.

Aaron Angello was inspired in a workshop, and undertook an experiment. As he noted in his preface to The Fact of Memory: 114 Ruminations and Fabrications (Rose Metal Press, April 2022), each morning, at the same time, he took as prompts the 114 words within Shakespeare’s Sonnet 29**, in serial order, one word per day.

For reference, here is the source text:
Sonnet 29
When, in disgrace with fortune and men’s eyes,
I all alone beweep my outcast state,
And trouble deaf heaven with my bootless cries,
And look upon myself and curse my fate,
Wishing me like to one more rich in hope,
Featured like him, like him with friends possessed,
Desiring this man’s art and that man’s scope,
With what I most enjoy contented least;
Yet in these thoughts myself almost despising,
Haply I think on thee, and then my state,
(Like to the lark at break of day arising
From sullen earth) sings hymns at heaven’s gate;
For thy sweet love remembered such wealth brings
That then I scorn to change my state with kings.

The result is a contoured topography of the author’s mind revealed in this collection of short prose pieces. Each day’s paragraph varies in length, style, structure, and subject matter. Sometimes we find plain—I am never a fan of the word straightforward—observations. Other times we seem to enter a realm of memory, although each such memory could be as fantastical as the boy who eats a seed he found in a field, and, within the space of a day, grows into a tree right where he stood.

The Fact of Memory is a car driven by a drunk, careening left and right, making you reach for the Jesus strap at every curve. The stream-of-consciousness writing is, as should be expected, uneven.

But then you come across insights that have you nodding:

Fate is the reason my credit score is so low.

When I look at myself in the mirror, I see mutiny, I see chaos, soldiers abandoning their posts and running blindly off into the smoky woods.

The other side of wishing is touch.

And then come the verbal acrobatics you hope someday to master:

Your dog, your books, your television, your wife, your future, your food processor.

Eventually they would leave the galleries, back outside, the zin in the welkin, woundly zwodder, beweeping nothing, saying to themselves, “Brah, that shit was sick.”

We look hot together. You and me, baby, we’re iambic.

Lastly, there are visions of such poetic beauty that you can merely rest your chin in your hands and marvel:

Right there among them, and no one saw this, a boy wearing a tiara made of tree bark was jumping and spinning along the sidewalk. He sang made-up songs made of made-up words, and everywhere he stepped, a few blades of grass sprung up through the cracks.

The birds flying from the stage to the lighting grid were very much like the birds that watched Hamlet jump into Ophelia’s grave.

…after I’d decided who I was going to be, no one ever doubted that that was who I really was. I didn’t even doubt it.

When I finished reading, I came to a strange realization. The writing made me think about the writer’s interactions with women. The flickers of misogyny disguised, perhaps, as humor and inspired by words like him (especially the forty-fifth word’s him) certainly helped to inform that impression—One of my favorite things to do is sit in a hot bath, the only light candlelight, drink a glass of wine, and listen to Mandy Patinkin sing Stephen Sondheim songs. Clearly, this is a feminine activity—but I also had to pull back and think about myself and that realization.

It’s rare that I end a book with a feeling about the author. I usually have feelings about the story, fiction or non-. I frequently have feelings about the dramatis personae within the pages—authors, after all, identify heroes to root for and villains to boo. But I had to recollect: when was the last time I ended a book with an odd wariness of an author I’ve not met? Especially after finding writing to admire?

Perhaps it was the unevenness of the prompts’ results. That, however, shines more of a light on my own biases for polished writing. I also considered that the idea of sharing that many first drafts with the world makes me nervous. But Angello is an established author and I hope the day comes when I am free to take the risks he has taken. Such freedom is an exciting prospect.