Things are broken at the home they’ve made, / like they were pushed by some invisible, measured hand. / It’s not his fault or hers, not the three-year-old boy’s / as he refuses to nap in this new town of no friends, / no kindly neighbors, no place for the two of them to escape to / while the man works to make a name for himself, / to secure their new life. It isn’t / the days she counts down until the next trip / out of this place she swears / at again and again. It isn’t anyone, or even how the river boxes them in, / or how there’s only one way out, up a hill / their car struggles to find the right gear to ascend. / It isn’t the wind that runs along the river carrying / the coal’s scent ahead of the barges just small enough / to angle their path around bends the water will find / a way to cut off into oxbows in some future they’ll / never see. It isn’t the air or the grayed night sky / that gets grayer each month, though there’s not a cloud / to be seen.

His voice breaks, / his heart too as the trashcan overflowed with scarlet / and orange and brown clues of the trees’ last gasps falls over, spills / across the sidewalk, the street, wind rolling now the empty container / down and down the hill, him too tired to do much / besides mutter Perfect to no one who sees / his broken world summed in this smallest insult, /

while she is in bed staring into midnight’s / clock-red numbers. She insists to herself / she can hear the digits click into position, the secret / voice of her weeks alone, so many hours of red wine / and silence. She falls finally / asleep among the broken souls of this town / as depressed spiritually as economically, she’s told / by a woman at the boy’s school whose joy in spite of all this / sadness or sorrow, melancholy or despair, or / whatever word best gets to the heart of this condition / is unnerving, not inspirational. Because while life goes on / grinding up each of this town’s residents, wearing out / marriages and first loves, breaking down ties / to place the high school’s Class of 20xx feels, / what lasts is knowing that though their teenaged desire / might beg them to leave, they never will. /

The man, his wife, and the boy are beginning / to surrender too. They’re almost ready to / put all their wishes into a bag and carry them / to the river, let them rest / alongside fractured railroad ties and steel toolboxes, / blown-out tires and tarnished hubcaps, the metal drum / that leaked its oil downstream thirty years ago. /

So many parts of themselves now broken / that it’s hard to focus on much else but her belly / not convexing, her ankles not swelling into her calves, / how a new life might reconstruct this life / they’re laboring against, a new life full of possibility / that could make the motion of the planet bearable again. 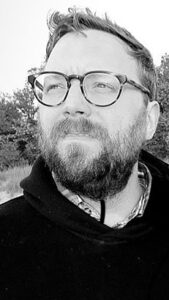 Michael Levan has work in recent or forthcoming issues of Lost Balloon, Heavy Feather Review, The Waking, and Waccamaw. He is an associate professor of English and edits and writes reviews for American Microreviews and Interviews. He lives in Fort Wayne, Indiana, with his wife and their three children.