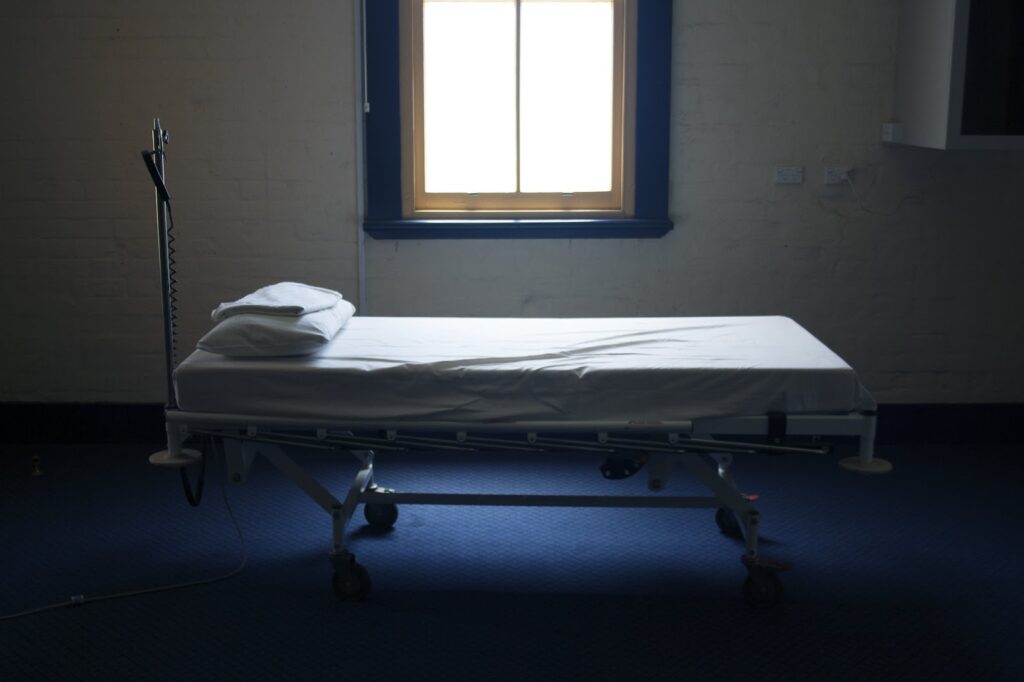 I must have heard her screams, though I don’t remember. I’m flinging open the hallway door, racing to her mother’s room. Fumbling at the lock with my master key.

A promise: you won’t die alone.

Too many women I’d grown to cherish had died, yet I thrived in that house. Death and me, we had an affinity. I knew to be patient; death knew to take its time. In the spaces of dying—between breaths as they slow, pulse beats as they tire, whispers as they fade to silence—I’d sit, maybe humming, maybe massaging cold hands and feet, maybe praying, maybe still. Night after night, sometimes. Death and me, we had an agreement. And so, I told the women—no, I made a promise: you won’t die alone.

They told me later LaKeisha was screaming, “My Mommy’s dead!”

Slamming into her mother’s room. No Velma. Hearing water running in the bathroom. Flinging open that door. Velma. On her back, arched across the closed toilet seat, head wedged up against the wall, arms splayed. Yvonne, our nurse, panting from her own run down the hall, helping me move Velma to the floor, beginning resuscitation. Turning off the sink tap, imagining Velma, alone, washing her face then feeling faint. Me, racing back to the office, dialing 911.

Donna, my office manager, wrapping her arms around LaKeisha and carrying her to the dining room. Holding the sobbing nine-year-old in her lap, and she the sole child in the room filling with the other women of our community. All those women, themselves living with AIDS, gathering around the stricken, now-silent child. Hands reaching out, voices murmuring, eyes veiling the fear lest LaKeisha should see it staring out.

A sacred quality in the waiting stillness.

Smelling bacon and coffee, seeing half-eaten breakfasts forgotten on plates. Kneeling before LaKeisha in Donna’s lap, looking into the child’s brown eyes in which shock and horror clasped each other tight. A few soft words and a kiss on the cheek, then retreating. Me, in my office, in my chair at my desk. Crying and hoping not to be too loud.

I’d made a promise.

The paramedics arriving, taking over resuscitation from Yvonne. Me, standing back, heart pounding, watching unthinking the clamor around Velma’s body on the tiled floor. Returning awareness of surroundings and looking about, eyes alighting on a photo of Velma, LaKeisha and her older sister hugging one another, smiling. Shocking, the contrast between their images and the scene before me.

Returning to the dining room. Asking LaKeisha if she wants to know what’s happening. She, nodding, never speaking. Me, saying the paramedics are helping her Mom, describing oxygen tank, mask over her mouth and nose.

Back to Velma’s room. The frantic motion around Velma ceasing; a paramedic on the phone, “… declaring her dead.” Yvonne, face haggard and strained, staring at me, mute. Me, staring back.

Walking again to the dining room, heart pounding, stomach roiling. Wondering: how will I tell her? The calming, cathedral quiet in our sunny dining room. Kneeling once more before her.

“The medics say they can’t help your Mom.”

God help me, but the shattered child only stared at me.

“Should I go back to see what’s happening now?”

She, nodding.  Me, leaving. Later, realizing I hadn’t said, your mother’s dead. But she’d already told us, screaming.

Me, like some automaton, shuttling from Velma to LaKeisha, always checking if LaKeisha wants to know, always confronted by her eyes’ stunned depths.

There’s a lot to do at such a time: making phone calls, talking to family, reporting the death to the coroner, letting him in the front door. I don’t remember.

Everyone wanting to say good-bye. Paramedics and the coroner’s officer, kindly, stepping back and waiting. One by one, the women and staff kneeling beside Velma for a moment or two. Watching as they carry her out, all of us—not LaKeisha, she’s not moving from Donna’s lap—arrayed along the hall and down the front stairs, silent witnesses to this departing.

Time for the repast, our indispensable, ritual community meal after one of our sisters dies. In the kitchen, donning aprons. Me, bending down, reaching for the big pot in a low cabinet. Stopping cold, guilt hovering, me and my hubris.

I’d made a promise.

Carol D. Marsh, a 2014 graduate of Goucher College’s MFA in Creative Nonfiction program, has won essay awards from Soundings Review, New Millennium Writings, Under the Gum Tree, Solstice Literary Magazine, and Tucson Book Festival. Other essays have appeared in Los Angeles Review’s Best of Annual print edition, River Teeth, Chautauqua Journal, and The Vassar Review, and anthologized in KY Story’s Getting Old, among others. Marsh’s book, Nowhere Else I Want to Be: A Memoir, was a Finalist (Memoir) in the Sarton Women’s Book Award 2018. Her chapbook, Border/Between: A Symphony in Essays, is published by Bamboo Dart Press.