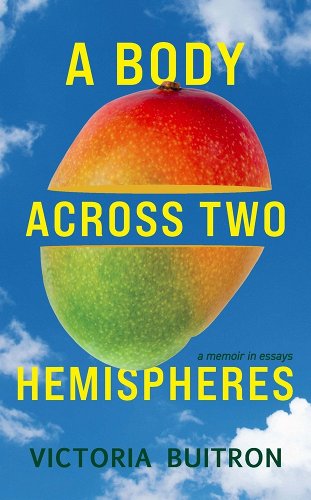 One of the things I like most about memoirs is getting to know the person as they reveal themselves, and then discovering a connection with them. Often the writer’s feelings or experiences prove to be relatable and universal.

Victoria Buitron accomplishes this in her debut book, A Body Across Two Hemispheres: A Memoir in Essays (Woodhall Press, March 2022), which portrays her life in Ecuador and Connecticut. It contains 25 essays arranged within three sections: The Southern Hemisphere, Between Borders, and The Northern Hemisphere. Near the end is a separate, intimate note titled Epilogue: A Letter for My Father. Buitron covers her somewhat difficult relationship with her father in a few of her essays, avoiding topics to maintain the peace between them. Her letter is bittersweet; it is my hope that he has read it.

Buitron’s essays reflect themes of identity, prejudice, humanity, and basic human rights. Her stories will appeal to many readers, especially those who have lived in more than one place and those who are bi-lingual. While each essay can stand on its own (and most have been published in journals), the stories are all interconnected.

In the first essay, “Bodybreak,” we learn she was born in Milagro, Ecuador, but was raised in Norwalk, Conn., starting at age 5. When she was 15, her family returned to Ecuador after her paternal grandfather passed. She experienced culture shock and fell into a deep depression that severely impacted her health. In her essay, “The Diamond of My Eye,” she describes the weight she lost from being so sick with the vivid description, “I remained a body of corners, while my eyes remained the only plump and curved parts.”

I understood and empathized with some of her health and appearance issues, such as those in her essay, “Teeth Fragments,” where she recalls an experience at the dentist’s office. The dentist claims her “wisdom teeth had more curves” than her body, and she writes that they “hadn’t known I had famished myself for years.” This is remarkable writing as she portrays her feelings through imagery that conveys further meaning: “When I got home, my jaw grew to the size of a bruised heart….” Her eventual acceptance of her body is neither hate nor love, but rather, tolerance.

One essay—the second in this collection—stood out because of its composition. “How to Be an Ecuadorian Girl” reminded me of Jamaica Kincaid’s essay, “Girl,” because of its lyrical style and second-person point-of-view. She describes the differences and challenges of growing up both in the U.S. and Ecuador. Her sensory details are exquisite: “You wear jeans that stick to your legs like gooey face masks. It’s hot and taking them off feels like pulling tinfoil from leftovers.” But wearing shorts in Ecuador is different than wearing them in Connecticut. “They will define you…. You will be the gringa slut who doesn’t know that fifteen-year-old girls can’t dress in shorts on the streets because men will acknowledge it.”

I related to her essay,“My Chosen Family,” when she informed her husband that she did not think she wanted to have children (I had made the same decision), and also to “The First Test,” when she discovered her future work as a translator. Many of us may recall the moment we decided upon our profession.

I was most entertained by her essays about her father’s profession as a trash collector, because some of the details reminded me of my husband’s own “treasure hunting” on garbage days. In “The Garbage Collector’s Daughter,” she explains how her father might bring home valuable items that were intentionally thrown out, such as a brand-new Saks Fifth Avenue cashmere sweater, a Nikon camera, and even a Kindle that Buitron promptly claimed. Sometimes items were unintentionally discarded, like the time her father inadvertently tossed a valuable painting. (After reading this essay, you can determine who was to blame.) He also salvaged broken items that could be fixed later. Similarly, my husband has brought home various items to refurbish and then give away or sell.

Her essay, “Cat Whistles and Wolf Calls” enraged me and has stayed with me because of how an incident affected Buitron and her mother. She recounts an incident that occurred when she was living in Connecticut at age 12. Her mother was outside, excited to create a garden. A strange man appeared and made suggestive remarks to her mother. Buitron recalls, “I knew it was a better neighborhood because no barrier separated the front yard from the street.” However, because of the man’s threatening words, “My mother never learned how to garden.” They were deprived of feelings of safety and security. The essay reminds us that it doesn’t matter where you live or how “safe” the neighborhood appears to be; those experiences can happen anywhere.

Buitron’s writing is descriptive and full of sensory details. I could smell and taste the crab meat while reading “Crab Feast,” and I could see and hear the “crickets plastered on my window” and the “tiny lizards hissing at each other” in her essay, “Changes.” Who can’t relate to this? “The buzz of mosquitoes [was] loud enough to keep me up until first light. In the first weeks, their bites ooze on my skin, the scabs itchy long after they have taken what’s needed.” I appreciate that Buitron shows us rather than tells us, because she trusts her readers:

Look at that butterfly, I say, moments after I’ve put on my pajamas, my mother making her way into my room. That’s not a butterfly, she says. A moth, perhaps, but her rush tells me that I’m wrong about that assumption too. A man appears…. He uses a broom to snatch it from the wall, throws some cloth over it, and carries it to our yard for it to fly into the darkness beyond the trees.

Only in the very last sentence does she confirm what we have figured out—that she was “confusing bats for butterflies.”

Finally, in her last essay, “(Un)Documented,” she explores the separation of parents and children at the border, the process of getting a Green Card, and citizenship, among other topics. She makes the subject-matter personal, evoking more understanding and awareness than she would if just expressing her opinions. It left me contemplative.

I truly empathized when she described the heartbreak experienced when family who are trying to visit relatives are refused entry from another country – particularly when there’s been a death in the family. She writes, “When going to a funeral is out of the question, all that’s left is remembrance…. I wonder how many eulogies have been uttered thousands of miles away from a funeral. I wonder how many memories can never be created with loved ones who are still breathing, all because of man-made borders.”

Ultimately, her writing left me with deep questions. If human lives are supposed to be so important, why do laws restrict humans who love each other from being together? Why were my sister-in-law’s parents denied Visas to the U.S. to visit their daughter and first grandchild? Aren’t love and family some of the most important parts about life?

Buitron’s essays are thought-provoking, intelligent, and a pleasure to read in a voice that speaks loudly and clearly.