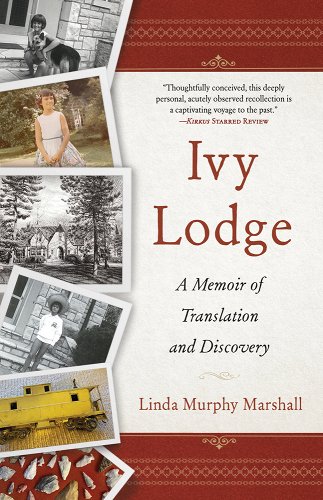 Two themes that I’m drawn to as a reader and writer are family and place. Ivy Lodge: A Memoir of Translation and Discovery by Linda Murphy Marshall (She Writes Press, 2022) combines both elements in an examination of factors that shaped the author. Through easy-to-read prose, Marshall analyzes her parents and her childhood although she doesn’t spend much time evaluating her current life. The latter is one of my only criticisms of the book.

Marshall’s father bought Ivy Lodge, a “regal-looking Tudor home” on an acre of land, at a low cost after the Brown v. Board of Education Supreme Court decision that ruled racial segregation in schools is unconstitutional. In her community of Kirkwood, Missouri, schools are being integrated, causing “white flight” that makes real estate a bargain. The family moves to Ivy Lodge when Marshall is about 7 years old. She revisits the home in the Midwest after the death of her parents to settle affairs with the help of her three siblings.

Ivy Lodge itself serves as the structure of the book with chapters named for rooms of the house. As Marshall goes from room to room, deciding what to bring back with her to the East Coast, memories arise. These span the years from her childhood to the time just before her mother died. She remarks several times that Ivy Lodge has a cold atmosphere: “Ivy Lodge itself sometimes felt like a cemetery to me, all of us buried inside.”

Marshall uses her skills as a translator to dissect her relationship with her parents and siblings. Her father is a distant figure, obsessed with trains and described as not knowing what to do with the emotional aspects of raising children. Her mother is a devoted housewife, acquiescing to her husband but also with a quiet mystery of personhood.

Her mother raised Marshall and her three siblings seemingly alone while her father served in local government. Marshall allows her mother more grace than a reader might. Her relationship with her mother is tense. Her mother makes comments about Marshall’s weight and snide remarks about the fact that she is emotional. She recounts her mother telling her at six years old that Marshall is to blame for contracting infectious hepatitis, instructing her to not to dare to tell anyone this was her mother’s fault. The starkness of a mother instilling in a young child that anything other than perfection is unacceptable is unsettling.

The prose of the book is soothing and filled with Marshall’s yearning for comfort and an expression of love. It becomes clear early in the book that Marshall has spent most of her life trying to decipher the hidden meaning of her mother’s words. She describes a moment when her mother brags to someone how close they are as a family. Marshall reflects on the word “close” and its various meanings. She doesn’t feel close to her siblings or her parents, writing, “it’s a lifelong source of deep sadness for me to realize that none of us are close, have never been close, despite what my mother advertised to people, adding to my perpetual confusion of what’s real about my family, what’s false, what words say versus what they really mean.”

In many ways, Marshall’s career as a translator was fated due to her circumstances. Her father’s inability to have patience with his children leaves Marshall with anxiety and she struggles to live up to unspoken expectations. Her mother uses coded language in almost all situations; even a compliment includes an unfair comparison or a verbal backhand. Marshall writes that “I understood from this, from other examples, too, that you could play around with language, with words and their meaning, create a private language of sorts.” Marshall’s attempts to untangle this language doesn’t provide a definitive answer to her parents’ behavior, but it allows her own parenting style to flourish where her own childhood floundered.

While the structure of the memoir allows Marshall to choose from a variety of childhood memories, she doesn’t give herself enough space to talk about her achievements. After leaving Ivy Lodge, she attends college, graduate school, learns multiple languages, and holds an esteemed job as a translator. She also did what her mother was unable to do: get a divorce and become a full-time single parent. She accomplished this while her parents were alive, finding a strength within herself that was not displayed by her parents. Overall, I’d recommend Ivy Lodge for anyone who wants to examine the language within their own family and to celebrate Marshall’s ability to explore her own life in the pages of this memoir.

Alexa Josaphouitch is a graduate of Drexel University’s bachelor’s/master’s English and publishing program. She writes memoir and creative nonfiction. She loves showtunes, books, and tea.