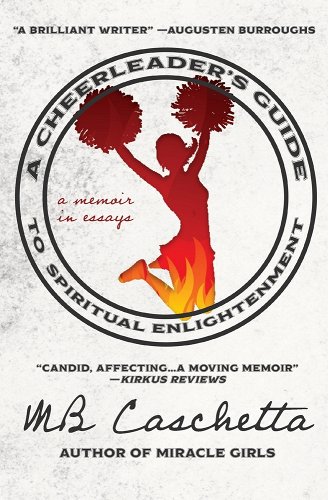 MB Caschetta’s A Cheerleader’s Guide to Spiritual Enlightenment: a memoir in essays (Engine Books, November 15, 2022) is a collection of 11 essays that string together as elegantly as beads on a rosary or mala. With an honest, conversational, often funny tone, the author takes us on her journey to find meaning through some of the most devastating events of our time, from the HIV AIDS Crisis and  9/11, to COVID-19.

In the opening scene she is 5 years old, stepping out of the family car onto property her father has just purchased to turn into a men-only hunting camp—clearly not a place for her. It’s a struggle for her to find her place in a family of three older brothers, a father who either ignores or criticizes her, and a mother who is constantly disappointed that she is not enough of a girly girl. Introverted and nerdy, she copes with the nightmares of childhood by building a protective shell around herself and hanging out with a neighborhood boy who is as much of an outsider as she is. Looking for an escape, she asks her mother if she can become a nun but knows “my mother will never let me become a nun, nor will she accept a weirdo for a daughter.” Her mother wants her to become a cheerleader. Eventually seeing it as a last chance at “being normal” and the only escape offered, she grabs it. Soon busy with cheerleading practices and beauty sessions, “everything my mother dislikes about me disappears under a dirt mound in the backyard patted into the shape of the little girl who has disappeared.”

Her real escape comes when she leaves for Vassar College, “the first place I live that feels safe,” where she immerses herself in the creative writing program and finds a new vocabulary for herself: “feminist, queer, depressed, trauma survivor.”

Settling in New York City after college in the 1980s when “the city itself is dying of AIDS,” she answers phones at a literary agency for a while before quitting and finding her community, joining ACT UP, Queer Nation, the Lesbian Avengers. She takes an editorial job at the Gay Men’s Health Crisis Center that launches her career as a medical writer.

Vivid, heartfelt scenes of her serving the sickness and death of friends and strangers amidst the AIDS crisis are written with grace and medical acumen that form wisdom borne of showing up and being present. Whether holding the hand of a dying young man she barely knows or sitting to write at her keyboard “trying to make sense of why we live and how we die,” she may no longer be a cheerleader, but she is a helper. She writes, “I was raised to be a cheerleader, a person who roots on brothers, whoever they are and whatever they do.”

We see this in action in the essay “God Is a Lesbian,” where she stumbles into St Vincent’s Hospital one Christmas Eve with Dave, a dying young man who had showed up at the Gay Men’s Health Crisis Center a few months before, confessing “I have no one.” As strangers help them into the emergency room — grabbing a wheelchair, holding a door — he tells each one of them they are angels, then turns to her to say, “It’s a miracle, don’t you think?”

After years of being at the center of the crisis and then living through the horrors of 9/11, she and her partner, Meryl,  move to Provincetown as she looks for “answers beyond the scientific, in something more spiritual,” but only finds more questions.

In the beautiful essay, “Anointed,” she contends with those questions during a four-day meditation retreat. Having been on silent meditation retreats myself, I know how loud they can be until the mind begins to quiet and the heart’s intelligence can be heard. In that quiet she hears the words “Ten Years” come out of nowhere in an empty room. It’s a testament to the kind of grace that weaves through this book that, exactly ten years after the retreat, her first book is published. When she gives us another example of receiving a message, this time through a red bird, in the essay, “Teach This to Your Heart,” she’s reminding us that these synchronicities, these graceful mysteries, show up in all our lives, if we are open to them.

In one of my favorite essays, “What Gets Passed On,’” she focuses on her relationship with her father, who late in life causes another devastating and hurtful experience, which she uses to deepen her understanding of him, herself, and her capacity to love and forgive.

Throughout the difficult life events chronicled in “A Cheerleader’s Guide to Spiritual Enlightenment,” Caschetta seeks self-understanding, not self-pity. It is this, and her talent and generosity as a writer, that keep the reader from ever feeling sorry for her.  We can’t help but cheer her on. 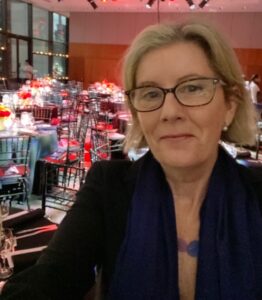 Fran Skennion Reilly is nonfiction writer and media professional with extensive experience in the national magazine and newspaper industries. A published writer of essays and poems, she is currently working on her first memoir. She earned a master of fine arts from the Maslow Family Graduate Program in Creative Writing at Wilkes University.