I’m stepping into the cold water for the first time with my kayak. Five experienced paddling friends wait to take me down the Nantahala, a class II/III whitewater river in Western North Carolina.

“Just follow me,” one friend says. I watch as he leans his boat toward the middle of the river and takes off. I panic, thinking I will be left behind. As I sit down and swing my feet inside my kayak, the current sweeps me sideways, then backward. I struggle for control and think  I’m out of my mind to be doing this!

That was the same thought I had when I started writing my memoir Craving Spring. Remembering the three whitewater kayak rules I learned that day on the river kept me going with my book.

Rule #1: Accept that you are going to flip over.

Nothing changes your respect for a whitewater river more than falling into the rapids. The shock of frigid water as your head goes under, the power of the current pulling you forward, and the pain of slamming your body into boulders can make you want to quit. An experienced paddler expects to flip out of her boat at some point. But she also knows to swim to the riverbank, take time to recover, then get back in her kayak.

I flipped over many times trying to write my memoir. At first, I panicked and convinced myself that my writing sucked. Other times, I’d get stuck on a chapter that brought up painful memories, and all I could do was cry. I didn’t realize that while writing about the past can be cathartic, it can also trigger a PTSD response.

Rather than let emotional currents drag me under, sometimes I had to stop writing for a day or a week. One time I couldn’t write for six months. Once I realized this was not a failure, I saw these breaks as part of the creative process, just as falling out of my boat was part of learning to kayak in whitewater.

When paddling a whitewater river, if you look at the rocks, that’s where your kayak will head. Instead, be aware of boulders but keep your eyes where you want to go, not where you don’t want to go.

Again, with writing, it’s essential to have a clear intention for your book. Otherwise, you may get tangled up in the weeds of uncertainty. For me, this happened when I started tampering with what I thought the reader wanted to know. Since I was writing about my experience as the mother of a teenager suffering from depression, I sometimes had trouble untangling my story from hers. That’s when I found it most helpful to train my mind not to look at the rocks.

By staying present to the purpose of my book—where I wanted to go—it was easier to know what to keep or discard when I began the editing process. I located where the deep green waters of my book flowed and guided my writing there with more confidence.

RULE #3: Keep paddling in the rapids.

It’s true that keeping your paddle in the river will help your kayak stay balanced, but when you’re in the rapids, you can’t just hold your paddle like a rudder. It’s critical to keep your boat moving and control what’s happening rather than let the rapids toss you all over the place. As you push your kayak against the water, you can direct your boat around the boulders to follow a safer line down the river.

The same is true for writing a memoir. If you plot out your story arc, setting the pacing, action, and dialog will be easier. That way, you can direct each chapter to build momentum and carry readers along in your experience as if they are in your boat with you.

With my book, I didn’t want to center the memoir on my daughter’s misery. Instead, I wanted to explore how I navigated my experience as her mother and how I grew as a woman. I remembered reading a Greek myth that gave me hope and solace during that time. It was the story of Demeter, Goddess of the Harvest, whose daughter, Persephone, was captured and taken to hell. Her story was my story.

Demeter became my guide in the rapids. I followed her as I explored my experience and found a structure that worked for my story arc. Not only did the myth give me insight as a mother, but it also informed the action for my writing and kept me moving toward my goal.

Paddling the Nantahala that day taught me how to use the energy of the water to move forward. Writing my memoir changed the way I understood myself. Going down a wild river of memories can be thrilling and dangerous, but a skillful writer, like a skillful kayaker, learns how to navigate and enjoy the creative flow. 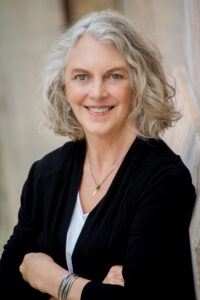 Ann Batchelder is the author of Craving Spring: A Mother’s Quest, a Daughter’s Depression, and the Greek Myth that Brought Them Together (Fall 2023/Legacy Book Press). She served as Editor of Fiberarts Magazine, was guest curator for the Asheville Art Museum where she designed and developed three major contemporary art exhibitions featuring artists such as Louise Bourgeois, Ann Hamilton, Sally Mann, Maya Lin, and Laurie Anderson, and was Director of Special Events for the Brooklyn Academy of Music. Ann earned an MSW in psychotherapy and is the mother of two adult children. Find her at www.annbatchelder.com.

9 comments for “WRITING LIFE: How Kayaking Buoyed My Writing by Ann Batchelder”