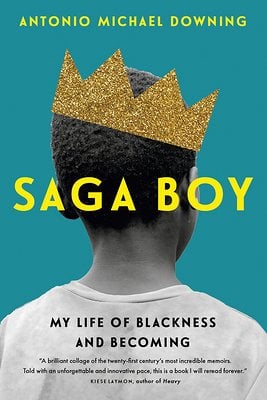 Antonio Michael Downing is the name printed on the cover of Saga Boy, but the author just as easily could have used nearly half a dozen other monikers.

Tony: the scrawny youngster roving the bush country of Trinidad, learning to read from the King James Bible, singing and quoting holy verses to emulate and impress the loving yet stern grandmother who raised him.

Michael: the adolescent reeling from his grandmother’s death, struggling and failing to forge a new life thousands of miles away in a rural Canadian town where he and his family are the only Black people.

Mic Dainjah, Molasses, John Orpheus: the adult musician who changes names, musical styles, and stage personas often as he attempts to stitch his broken life back together.

Colonialism, parental abandonment, incarceration, abuse, trauma, and survival are all themes in Downing’s memoir, Saga Boy: My Life of Blackness and Becoming (Milkweed Editions, September 2021). But, more than anything, the book catalogs the author’s transformation from one identity to another to another, constantly searching for his true self.

It’s a common idea to many of us, that of starting over — we do it when we move to a new place, start a new school, leave or enter a relationship. But Downing takes these transformations to new levels, mainly because they are forced upon him by a tumultuous family situation that leaves him moving from country to country and trying to heal from childhood traumas with essentially no help.

He wasn’t alone, exactly. From his devoted grandmother, Miss Excelly, to his Auntie Joan who takes him into her home multiple times, Downing shares a deep bond and love with the family who raised him. Noticeably absent are his mother and father, whom he doesn’t really meet until he’s older and who pop in and out of his life, often bringing chaos with them.

But despite being around his family, Downing often felt neglected by them, particularly on an emotional level. He was the victim of abuse as a young boy in Trinidad and thought only he knew about it, only to find out years later that his family suspected but said and did nothing. Even when his mother or father brought additional trauma and continually broke his trust, Downing’s other family members still insisted he needed to stay in touch with them because they were his parents. These constant betrayals meant that Downing relied on himself to figure out his path and who he would become. They led to all the identities he tried out over the years.

Downing’s memoir showcases his love for language that started with the poetry of proverbs and psalms he read in that King James Bible in Trinidad. He grew up speaking Trini slang mixed with the English and French of his country’s colonizers. Today, he continues playing with language through writing and performing rap and hip-hop music.

Writing prose is clearly another of his talents. Throughout Saga Boy, Downing draws the reader deep into every place he inhabits, especially Trinidad. When he describes running past the cemetery next to his home, or steering clear of the jungle with its potentially deadly creatures, or even the hours he spent watching adults playing table games, he brings the island to life on the page.

And despite all the pain his family brings him, Downing doesn’t just focus on their faults. He shares the good and the bad, his disgust and his love, reminding us that family relationships are rarely black and white — instead residing in an oft-messy and complicated middle.

Saga Boy is a captivating look at identity, particularly that of young Black boys, and how our landscape, relationships, and family mold us starting in our earliest years and continuing through our lives. If we’re lucky, we find the sense of self and belonging that Downing also seeks. His memoir is a beautifully written reminder of the often treacherous — but potentially rewarding — nature of that journey.