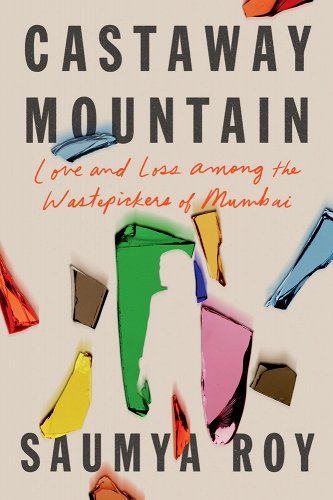 In Castaway Mountain: Love and Loss Among the Wastepickers of Mumbai (Astra House 2021), Indian journalist Saumya Roy draws back the curtain to reveal a desolate landscape – the landfill on the outskirts of Mumbai where the refuse of urban life has grown into mountains. Deonar is more than a setting though. It is home to a community of rich characters who try to wrest a living out of the mountains, sifting through the ever-rising rot and rubble to collect scraps of cloth, pieces of plastic, and glass. Occasionally they find a piece of jewelry; more often they tear their flesh on shards of glass, syringes, and rusty nails.

With Dickensian attention to detail and the intertwined lives of supporting characters, Roy tells the story of that community by focusing on one 17-year-old girl, Farzana Ali. Deonar is Farzana’s home. She was born there and has been a scavenger on those heaps of garbage since she could first walk. She is undaunted by the smells, the fires, the bulldozers, and disease.

We are thrown into the gruesome reality of Farzana’s life in the opening chapter when she finds the bodies of conjoined triplets, newborns fused together at their stomachs. It is not uncommon to find dead infants in the heaps of new garbage that arrive every day, but these intertwined bodies are so unexpected that they take on magical significance. Farzana and her friends bury the infants along the banks of the fetid creek at the edge of Deonar and say prayers over them. From this moment through the rest of the book, Farzana emerges as a young woman of remarkable resilience and reverence.

Her embrace of life is not diminished by where she lives or what she does. Roy carefully digs into Farzana’s daily existence to uncover this poignant truth: the struggles Farzana faces are common to teenagers in any community –balancing obedience to her heart with obedience to her patriarchal older brother, deciding if she likes the boy who likes her, trying to stick to the straight and narrow in a world full of crooked paths. We see her move through the rites of passage and come of age inside a horrific world, all the time holding on to her innocent capacity for love and joy.

But it is impossible to come through unscathed. At one point, Farzana and her sister spend the day in the medical waste section of the mountains, sifting through syringes, bloody gauze, saline bags, and body parts looking for bits of plastic, glass, and cotton. Unable to wash off the smell of human remains, at the end of the day, Farzhana’s sister says, “All we see lingers in us.”

This theme of “what we see” is primary in the book. In the introduction, Roy confesses that she has written the book “to take readers into a world they created but never visited, so they can see [the] mirror image of their own lives.” Deonar is not unique. All metropolitan areas face the challenge of dealing with an ever-increasing volume of solid waste. Major cities on every continent have spawned unsustainable mountains of garbage like the ones at Deonar.

When I was a child, my grandmother still lived on a farm. There was no garbage service in the country so she sorted her garbage into three categories: things that she could burn in a rusted barrel behind the barn, things she could throw on the compost heap, and things that wouldn’t burn and didn’t rot. Items in the last category had to be hauled to a gulley on the far end of the pasture where tall weeds grew up through the hull of an old truck that had been discarded decades earlier. Around it were bottles, tin cans, rusted plows, car parts, and broken tools. It wasn’t pretty, but it wasn’t fetid. It wasn’t even crowded.

My grandmother was born in 1893. Although she lived most of her life in the 20th century, she never participated in the heedless excesses of that century. Once my mother brought plastic cutlery to a family gathering so that the women could spend less time washing dishes. My grandmother welcomed the offering, but after dinner, she insisted that all of the plastic forks, knives, and spoons be washed and stored for the next big meal. My mother muttered irritably about the incident and her mother-in-law’s senseless frugality for years.

This scene from my childhood comes to my mind as I read Castaway Mountain. There’s no disputing that my grandmother was frugal. But maybe frugality wasn’t all that was at play. Maybe she foresaw what would happen to the gulley at the back of the pasture if she started throwing away plastic cutlery after every family gathering. The refuse of my grandmother’s life was never invisible to her. She had to figure out what to do with every scrap she threw away and dedicate a portion of her own property to what she couldn’t destroy or recycle.

My mother didn’t face that challenge. I don’t either. We are city-dwellers. Our garbage is picked up at the curb and taken so far away that we never have to see or even think about it again. Samauya Roy wrote this book so that we could see the repercussions of the rapid treadmill of consumption and disposal we are on.

I admire her straightforward prose and her ability to tell a true story that reads like a novel. She succeeds in weaving complicated political, domestic, communal, and personal threads into one cohesive story by keeping her loving and unflinching focus on Farzana. It’s impossible to ignore my common ground with Farzana and impossible not to admire her. At the same time, it’s impossible to ignore the disparity in the physical circumstances of her life and mine. The lesson Samauya Roy delivers in this book – that there are penalties for overconsumption — is not heavy-handed or didactic. She simply shines a light on Farzana’s world that allows us to see the unpleasant truth we’ve had the luxury of blindly ignoring. 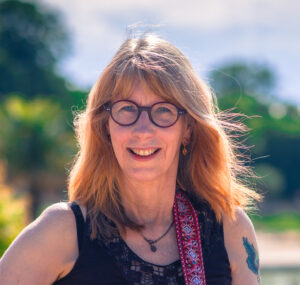 Christy Moore is a songwriter, blogger, and essayist who teaches writing at the University of Texas. She has been published in The Disruptive Quarterly and is currently working on a memoir about her great grandfather who refused to fight for the Confederacy and was later hung for murder.

2 comments for “REVIEW: Castaway Mountain: Love and Loss Among the Wastepickers of Mumbai by Saumya Roy”