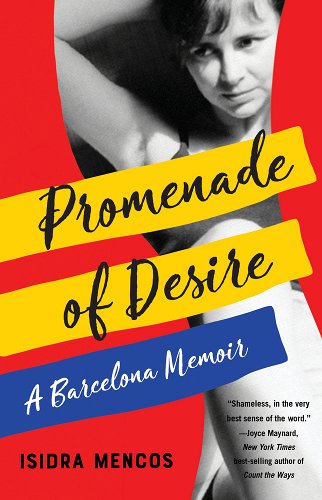 Desire. The word itself evokes our wants. Longings. But while our wants live in the brain and longings in the heart, desire is of the whole body. It moves us. Compels us to act.

Action, guided by desire, can be dangerous. Throughout history, the very thought of women’s desires has sent shivers down the patriarchal spine. Great efforts were made to squash those desires, lest they fuel change and shift the balance of power.

What happens, though, when female desires, bodies, and pleasures are squelched and shamed?

Set in Spain in the 1960s through the early 1990s, Isidra Mencos’s compelling Promenade of Desire: A Barcelona Memoir (She Writes Press, October 2022) explores these very questions. Mencos examines how the muzzling of her own desires affected her childhood and coming of age. We first meet her at age 5 in San Julian de Vilatorta, the small village where her family spent their summers. Mencos is sitting on a tree limb, pretending it is a horse, when she discovers a tickle between her legs as she moves back and forth.

Her mother scolds her: “We don’t move like that. Don’t do it again.” Young Mencos isn’t sure what her mother means by “it,” but the message becomes clear when her mother catches her searching again for that tickle under the blankets in bed. Her mother pulls Mencos’s hand away and looks at her with disgust.

In short, powerful scenes, Mencos skillfully balances the limited understanding of her younger self with the compassion of the adult, who is all too aware of the high price of shame. She writes, “My hand crept back between my legs, but no matter how much I rubbed down there, I couldn’t relax … I gave up and fell asleep out of sheer exhaustion—the first of many nights when I was locked out of my own body.”

The author lives with nine siblings in a “proper Catholic,” well-to-do family where problems are not spoken aloud. Roles are clearly prescribed—at least for the girls, who are tasked with household chores. The boys are granted much greater freedom to do as they chose with their time, both by themselves, and it seems, with others. Mencos writes of a “grinding game” her 13-year-old brother Guille plays with her when she is 6: “I remembered Mama’s revulsion when she … caught me with my hand between my legs. Now Guille had ground his body against mine down there. Would Mama be mad if she knew? Just in case, I didn’t say anything.” The consequences of her silence are considerable and longstanding for Mencos. “Decades later, the weight of a man’s body on my own would still constrict my throat, my mind going into flight, my flesh into freeze.”

Her promenade of desire begins in earnest when she starts college in Barcelona in 1975, the same year Spain’s long-time dictator Franco died. The parallels Mencos draws between her own transformation and that of her beloved country are one of the memoir’s many strengths and are described in rich and sensual language. Both she and her countrymen are suddenly granted great freedoms with no guidance and few models to steer them. Still, these are exciting times and some of Mencos’s most vivid writing occurs when she captures the rhythms of the streets:

The long promenade of Las Ramblas and the neighborhoods to its right and left became my home at heart. … you ran into the odd guy selling American cigarettes by the unit, young couples strolling hand in hand, old men with felt hats or tweed caps and a stub between their lips sitting on the chairs lining both sides of the promenade, families with squealing kids delighted to buy their first pet at the birds stands, matrons buying carnations for Sunday lunch at the flower stands, long-haired guys offering brown bars of hashish wile mumbling ‘Chocolate, direct from Morocco, best you’ve ever tried.

Mencos describes how the new freedoms impact the broader culture and her own world view:

Every day was laced with art and play…Icons of Spanish popular culture that at home had been frowned upon as coarse—from popular flamenco dancers to matadors—became objects of my admiration, their exuberant expression modeling a way of being in the world that didn’t apologize for its brashness.…We were touching the eye of the hurricane, but not fully overrun by it…

Brashness, expression, and excess are integral parts of Mencos’s tumultuous journey. We follow her as she moves into a commune and later navigates several relationships, as well as nights with “random lovers.” There are friendships and betrayals. She betrays others too in an urgent attempt to find true connection. She openly shares her flaws.

She moves from job to job and apartment to apartment, with short stints back home.

Through every detour on her journey, though, Mencos grows. In Promenade of Desire, Mencos takes a bumpy road and turns it into art. Unapologetic and unflinching in her language, her words are also lyrical, engaging, and quite lovely. Spoiler alert: Mencos does find her way. To discover where and how she finally befriends her desire, you will have to read the book. I wholeheartedly recommend that you do. 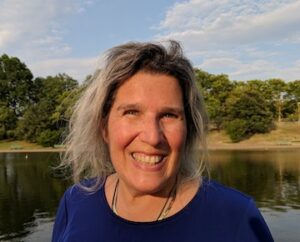 Diane Gottlieb’s writing appears in SmokeLong Quarterly, Atlas and Alice, Bending Genres, Barrelhouse, The Rumpus, Split Lip, Hippocampus Magazine, Brevity (blog), and 100-Word Story, among other literary journals, as well as in several anthologies. She is the winner of Tiferet‘s 2021 Writing Contest in nonfiction, a finalist in SmokeLong Summer’s 2022 micro competition and is Prose/CNF Editor of Emerge Literary Journal. You can find her at https://dianegottlieb.com and on Twitter @DianeGotAuthor.